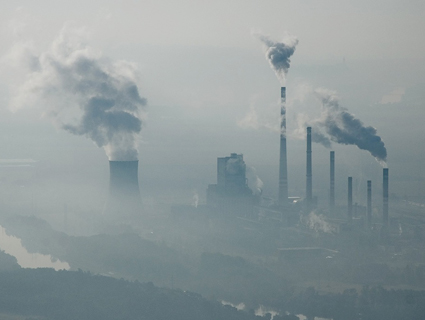 Perhaps smarting from getting a zero percent return on investment from the $36.7 million spent bashing Barack Obama, the Koch Brothers’ Super PAC Americans For Prosperity has narrowed its focus on a new enemy: a tax on carbon emissions. On Thursday the AFP announced that the entire House GOP Leadership Team, including Speaker John Boehner, Republican Majority Leader Eric Cantor, and seven other GOP Congressional leaders, signed a pledge to “oppose any legislation relating to climate change that includes a net increase in government revenue.”

“It is heartening to see that for the second congress in a row the House of Representatives will be led by a team that is publicly committed not to use climate as a guise to grow government,” said James Valvo, AFP Director of Policy. “Carbon taxes are once again being floated as a way to raise revenue so that Washington can skip the hard work of actually getting runaway entitlement spending under control.”

Meanwhile, fearing the White House is discreetly plotting to push through a carbon tax in the lame duck session of Congress, the conservative think tank Competitive Enterprise Institute has filed a lawsuit to force the Treasury Department to release more than 7,300 emails that include the word “carbon.”

With a carbon tax, the government imposes a fee on carbon, then translates it into a tax on electricity, natural gas, or oil with the intent of curbing planet-warming greenhouse gases. But the AFP sees it as a lot of (regulated) smoke and mirrors to hide tax hikes to fund bailouts and big government spending.

Historically, a carbon tax has not been a politically winning issue. During his first term, Obama’s plans to reduce emissions through a cap-and-trade legislation lost steam after stalling in the Senate. He also left a slew of other politically risky environmental reforms in limbo in the run up to the election.

But not everyone in Washington is opposed to the idea of a carbon tax. Even some conservatives are coming around. In 2010, Republican Congressman Bob Inglis was ousted from office in South Carolina in favor of a Tea Party candidate after saying he believes climate change is a real thing. Inglis now heads up the Energy & Enterprise Institute which promotes a “tax swap” plan to increase levies on carbon dioxide emissions while reducing taxes on personal income and businesses. The idea is backed by several conservative icons including former Secretary of State George Shultz and Reagan economic advisor Arthur Laffer. And on Tuesday, the conservative think tank American Enterprise Institute held a panel discussion on the “economics of carbon taxes,” making the case that the tax might serve as a possible solution to reducing the nation’s debt as the fiscal cliff looms.

In the wake of Hurricane Sandy, which scientists argue was supersized due to rising sea levels directly related to climate change, the Brookings Institution, a liberal think tank, released a paper calling on Congress to impliment a modest carbon tax, setting aside a percentage of the revenue for clean energy technology, and allocating the rest to tax cuts and deficit reduction. The authors claim such a tax would not only combat climate change by curbing harmful carbon emissions, but would “improve the nation’s balance sheet, and stimulate job-creation and economic renewal.”

Indeed, in British Columbia, Canada’s only province that has a carbon tax in place, preliminary data shows that the tax has had a “dramatic and positive” impact on the environment since it was implimented in 2008. A study by the University of Ottawa showed that B.C.’s energy use and carbon emissions were 16 percent below the other provinces. At the same time, the province holds the lowest corporate and personal tax in the nation. Taxpayers got back more than $500 million in tax cuts than they paid in carbon taxes, according the report. Even industries that produce a lot of carbon emissions, such as cement mixing plants, only saw a modest increase in taxes—around 2 percent, according to the study.

Amid all the chatter in Washington this week, Obama hasn’t specifically outlined any plans to propose a carbon tax. So is there even one on the table? Maybe not.