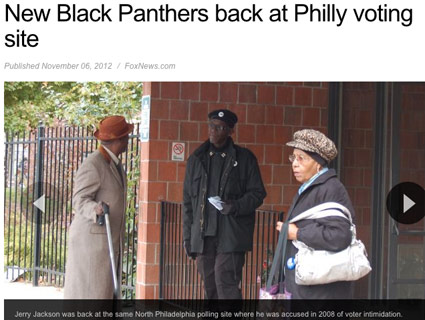 Today I’m embedded at the Election Protection phone center in Washington, DC. The room is filled with the chatter of volunteers fielding thousands of calls from all over the country about troubles at polling places, voters being wrongly turned away because of voter ID, or lack of working voting machines, or prohibitively long lines. This is where you’ll the real story of how votes are discouraged and blocked in 2012.

But on Fox News, there’s only one story: the New Black Panther Party. Back in 2008, a pair of members of the NBPP showed up at a polling station in a mostly black neighborhood in Philadelphia, one of whom was holding a baton. Then, as now, Fox News hyped the story, at the expense of covering genuine voting problems elsewhere. A Bush administration lawyer, working with GOP activists, tried to file a voter intimidation case but was unable to find any actual intimidated voters. The Justice Department ultimately narrowed the case, acquiring an injunction against one of the two NBPP members—the one who was holding a baton—and barring him from ever carrying a weapon near a polling place again.

After the charges were trimmed, Republicans accused the Obama administration and the entire Justice Department of being racist against white people, knowing that the prosecution was championed by conservatives at Justice working with outside GOP activists to shore up what they knew was a weak case. An Inspector General’s report found no wrongdoing on the part of political appointees at the Justice Department, or the officials who ultimately decided to narrow the charges.

The right’s fixation on the New Black Panthers, then as now, is another example of American politics being separated into two distinct versions of reality. While voters all over the country struggle with systemic problems caused by Republican engineered restrictions on voting, changes that were deliberately sought to disenfranchise potential Democratic-leaning voters, the right is fixated on some loser standing outside of a polling place in a silly uniform. My colleague Kevin Drum made a similar point this morning. Unfortunately, it can’t be made enough.