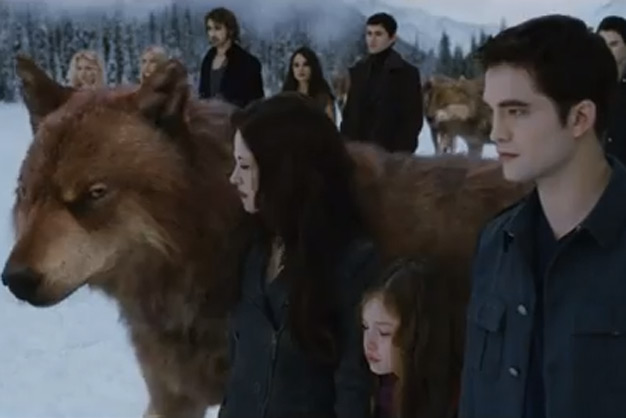 Rest assured, they all break out into Gangnam Style shortly.<a href="http://www.youtube.com/watch?v=ti0H-bvMi3I">YouTube</a>

For the past four years, the Twilight franchise has been America’s abortion-hating, abstinence-promoting insane ex-girlfriend who won’t go away and won’t stop stealing all your worldly possessions and patience. The final installment in the adaptations of the Stephenie Meyer tween fantasy book horror-show is, unsurprisingly, no exception.

As the series trundles toward its box-office-goosing conclusion, it’s now virtually impossible to give half a damn about the fate of the central characters. After four novels, four prequels, and godless piles of fan fiction, Bella, Edward, Jacob, etc. are all fully developed as the wafer-thin archetypes they have always been. Twilightmentum has burrowed so deeply itself into our culture and national consciousness that our Supreme Court nominees are actually asked about it during their confirmation hearings.

There is, quite simply, nowhere else for the series to go but down a tedious, two-hour road to the inevitable happily-ever-after.

Breaking Dawn – Part Deux takes an extraordinarily talented director (Bill Condon, whose work includes Gods and Monsters and Dreamgirls) and reduces him to choreographing Playstation-grade melees and monotonous vampire sex. The dialogue is so stodgy it’s a miracle it wasn’t legally classified as a hypnotic drug. (Bella screaming “SOME STUPID WOLFY CLAIM!” right before drop-kicking Jacob is the highpoint.) The acting is so epically phoned, the vamp-and-werewolf emoting so markedly blah, it’s hard not to think everyone on camera is grateful for this to finally be done. (This goes just as much for the especially adept actors—Michael Sheen, Billy Burke, Elizabeth Reaser, Kristen Stewart—as it does for everybody else.) And when you get to the end credits, you have to hear this bleeding awful song, again.

After 10 minutes of this movie, this was the only note I managed to scribble out: 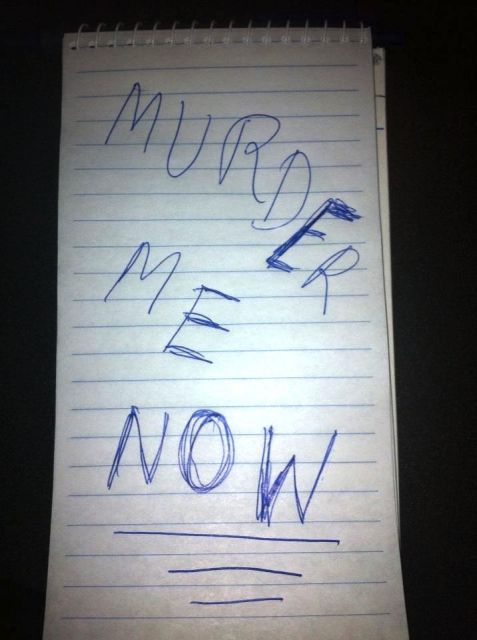 And then, the Natty Light kicked in, and I began enjoying myself famously.

See, if you watch Breaking Dawn – Part 2 with a clear head, it nets 1 star…maybe 1.5 stars. But the film scores a commendable 3 out of 4 if you watch it smashed out of your mind.

Do I recommend that you see the new Twilight this weekend? Of course I do. Just so long as you get drunk first—irrevocably drunk. I’m talking, “I can’t tell the Partridges apart anymore” drunk. I mean a level of smiling intoxication at which you cannot hear the difference in quality between vintage Motown and Jenna Marbles’ “Bounce That Dick,” nor can you distinguish between your momma’s cooking and the Arby’s value menu.

Due to the necessary supplements of Bulleit, Bagpiper, The Kraken, rice wine, rakia, Natty, and a CamelBak full of jungle juice, this will probably end up being the most expensive movie ticket you will ever buy. But, it kinda, sorta, maybe pays off.

One of the earlier scenes involves quiet and extremely goofy vampire sex between the newly married Bella (KStew) and Edward (RPatz). Ordinarily, this would be the dumbest thing ever, but your eyes have crossed, your senses numbed, and your brain tissue has essentially fermented. You’re at a chemically altered state in which you can barely remember if you’re wearing pants, much less worry about visual style or plot. Thus, you can’t help but giggle thunderously at the nerdy vamp-sex, and have the time of your life doing so. (For a brief moment of time you start to think this sequence of lame, unapologetic teen-vampire intercourse is the most glorious thing to emerge from the film industry since Garrett Brown invented the Steadicam.)

Anyway, within minutes you’ll likely be experiencing a short self-induced coma, which will allow you to coast unscathed through the hour or so of flat drama and consequence-free subplots that follow. By then, you’ll have forgotten about all the ultimately unnecessary but major plot points (Bella is now a vampire, the Team Edward/Team Jacob love triangle has been conclusively resolved, Bella and Ed now have a half-vamp-half-person daughter, a shadowy vampire junta called the Volturi are pursuing them, or something), and you’ll be able to just savor the moments that will surely be immortalized as amazing GIFs:

Again, all of this is fantastic when you can basically taste your liver simmering.

By the time the climax roles around (protracted bloodletting, in an open field, in which a lot of monsters fall into a fiery chasm of lava), you’re far too busy suffering from euphoric cardiac arrest to recall why you even paid to see this garbage in the first place. In fact, you’ll be having such a great time convulsing furiously from alcohol poisoning that you’ll even be able to forget all about the media frenzy and unbearable public outcry surrounding the tragedy of this: 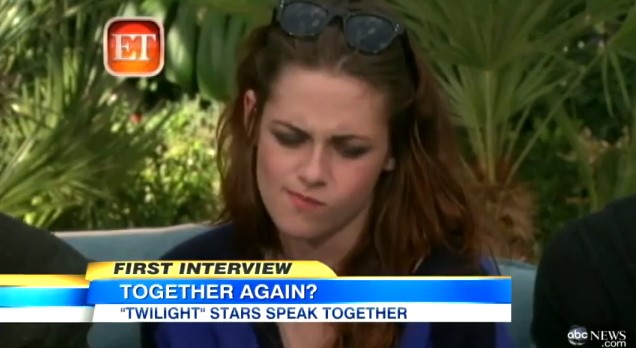 Now here’s a trailer for you:

Breaking Dawn – Part 2 gets a wide release on Friday, November 16. The film is rated PG-13 for sequences of violence including disturbing images, some sensuality, partial nudity, and inexcusable Twilighting. Click here for local showtimes and tickets.