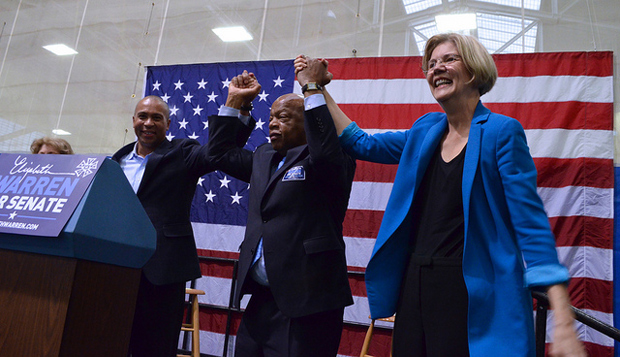 Two years ago, Elizabeth Warren told David Corn that she’d rather stab herself in the eye than go back to Washington. On Tuesday, the Harvard Law professor and creator of the Consumer Financial Protection Bureau ate her words, knocking off Sen. Scott Brown (R-Mass) in one of the most closely watched—and at times nastiest—races of the 2012 cycle. Warren’s win isn’t just a case of a Democrat winning in Massachusetts; perhaps no candidate, President Obama included, inspired as much enthusiasm from progressives across the country. (She raised more money than any other Senate challenger in the country, much of it from out of state.) NBC News called the race shortly after polls closed in Boston.

Warren did it largely by sticking with what made her a political star in the first place—a fierce defense of the social contract, which led Republican to dub her “Matriarch of Mayhem” for her support of Occupy Wall Street:

For Republicans, a what-might-have-been remains the campaign finance truce Warren and Brown agreed to, which barred outside groups from buying TV ad time in the Bay State (per the agreement, any independent expenditure would have to be offset with a chartiable donation from the campaign). Given the extent to which Republican outside groups outspent Democratic groups in 2012, that bargain almost certainly ended up working in Warren’s favor. It also meant that the fiercest attacks on Warren’s character—hitting her, for example, for identifying as Cherokee at Harvard—came from Brown himself, eroding his largely positive image in Massachusetts.

For the 53-year-old Brown, this is likely not the end of his political career. With Sen. John Kerry rumored to be a top choice to replace retiring Secretary of State Hillary Clinton, there’s a possibility a new seat could open up as early as December. In that case, Brown would be a heavy favorite for the Republican nomination, and with a comparably weak Democratic bench in the state, stand a decent shot at getting his old job back. Alternatively, with Democratic Gov. Deval Patrick term-limited after 2014, he might just opt to try his luck closer to home.

This post was originally published based on inaccurate reports that the race had been called for Warren. The race has since been called by CBS and NBC.