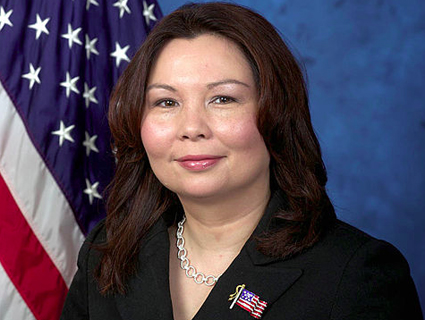 Ladda Tammy Duckworth is the child of a gun-loving World War II vet and a Thai immigrant of Chinese descent. She lost her legs piloting a Blackhawk helicopter through an insurgent attack in Iraq. In January, using prosthetic legs, she will step onto the floor of the US House of Representatives as the first combat-injured female member of Congress in the history of the United States.

Duckworth was elected to the House on Tuesday by voters in Illinois’ 8th District, unseating Joe Walsh—a loud, brash tea party freshman whose tough talk on fiscal matters was belied by a personal history that included delinquent child support and a condo foreclosure. The deep-blue state Legislature had redistricted the 8th into a Democratic-friendly mix of affluent Chicago suburbs and immigrant strongholds; Walsh—who’d only won election in the tea party wave of 2010 by 290 votes out of more than 200,000 cast—was basically abandoned by national Republicans. It didn’t help that Walsh called the president “a tyrant,” and at virtually every opportunity dismissed Duckworth’s military service and yelled at constituents.

In his place, Capitol Hill receives a favorite of the Democratic establishment; Duckworth is a former Obama assistant secretary of veterans affairs, a solid blue vote, and an impossibly upbeat personality headed to a fractious and frozen Congress. But in the Illinois 8th, a major waypoint for Midwestern industry and infrastructure, she pushed local issues: manufacturing, jobs, and social programs for the underprivileged. “My strength is in finding ways to make the government work for the people,” she told me this summer, “finding waste, or money that is not being properly used…or finding opportunities that are out there and making them work for the community.”

But before she heads to Washington, Duckworth has an extra stop to make next week: On November 12, she’ll gather with old Army buddies in St. Louis for her “alive day,” when they celebrate surviving the attack that took her legs. She’ll reunite with the copilot of her fated helicopter, Chief Warrant Officer Daniel Milberg, who beams when he thinks about Duckworth’s future in Congress—even if they don’t always see eye-to-eye on politics. “Too many people, military people included, are too willing to have a pity party. Man, there’s no time for pity parties—look at this gal,” he said. “I look at her and I think: ‘What have I got to be cryin’ about?'”