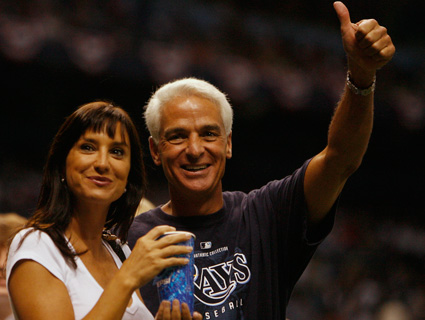 I just ran into former Florida Gov. Charlie Crist, the former Republican who has endorsed President Barack Obama, and his wife Carole, while they were strolling through the Obama campaign event in Chicago. “What’s going to happen in your state?” I asked him.

It’s close, he said. It’s possible Obama can win. Yes, I replied, but if it’s close, shenanigans can come into play.

“Yes, yes,” Crist said. “Listen to what happened to my wife.” He then nudged me in her direction. “Tell him,” he said to her.

It was a phone call, she said. A robocall. it came at 8:15 this morning. Usually, she hangs up on such calls. But this one she listened to. It went something like this: “I’m calling from the supervisor of elections for Pinellas County to remind you that Election Day is tomorrow and you can vote until 7:00 pm.” Tomorrow.

“If you woke up and heard about long lines and heard a call like this,” she told me, “You might think you can wait until tomorrow. How many thousands of calls like this went out? And who made them? I don’t know.” (She was indeed one of thousands in the county who received the same misleading call.)