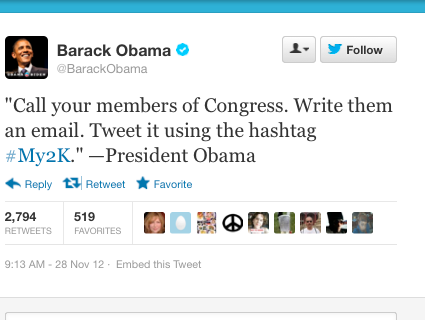 Earlier today, President Barack Obama took the battle over the fiscal cliff to Twitter, urging his followers to voice their support for his budget plan with the hashtag #MY2K. The tag refers to the $2,200 that the average American family will save each year if Congress votes to extend the Bush tax cuts for all but the top 2 percent of earners.

Obama’s Twitter campaign reflects a push to mobilize his large army of grassroots supporters beyond the electoral campaign. His strategists don’t want to repeat the mistakes of four years ago, when the populist energy from his campaign fizzled for lack of any meaningful way for his supporters to stay involved. Vocal support from liberals for the middle-class tax cuts might make it easier for Obama to boost taxes on the rich.

The #MY2K hashtag quickly began trending on Twitter. But waging a policy battle with social media isn’t as simple as it might sound. Here’s a sample of tweets that use Obama’s hashtag:

“Call your members of Congress. Write them an email. Tweet it using the hashtag #My2K.” —President Obama

But there’s this thing called a mandate. . .

If only we just had a big election to decide if the rich should pay a little more in taxes. #my2k

And don’t forget the kittehs!

Just asked Ms.Adalay ( the cat) what 2 spend#MY2K on she said FISH