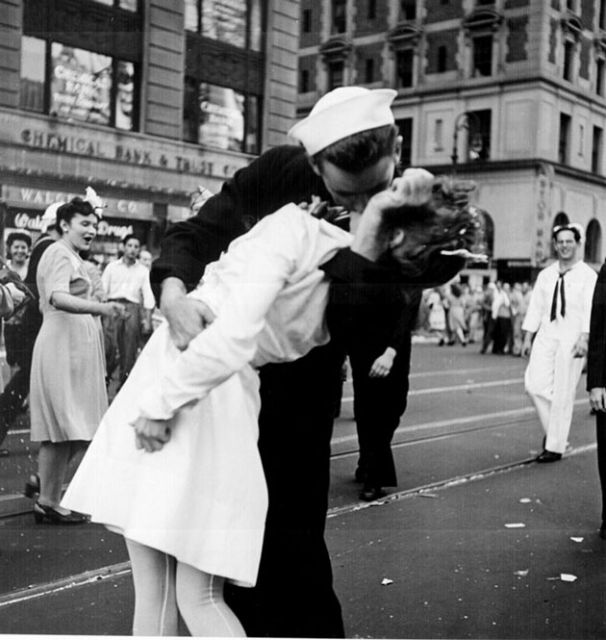 The famous scene from a different angle, as captured by a Naval photographer. This photo instead of the LIFE one is used here for copyright reasons. Lt. Victor Jorgensen / The National ArchivesThe iconic photograph has inspired wedding cake toppers and a 25-ft tribute statue. But it turns out there’s nothing romantic about the scene in the photo, according to interviews with the identified “couple.”

On VJ  day in 1945, the sailor, George Mendonsa, was drunk by his own admission. So drunk that even with his girlfriend and future wife in tow—she’s the head peeking behind behind his shoulder in the LIFE photo—he grabs a random woman and kisses her. The woman was Greta Friedman, a dental nurse. This was the first time she’d ever laid eyes on him.

“Suddenly, I was grabbed by a sailor. It wasn’t that much of a kiss.” she said in a 2005 interview with the Veterans History Project. “I felt that he was very strong. He was just holding me tight. I’m not sure about the kiss…it was just somebody celebrating. It wasn’t a romantic event.”

Although the backstory has been around for years, it wasn’t until the writer behind feminist blog Crates and Ribbons posted about the photograph that the story resurfaced. In a pair of posts, the blogger criticized media coverage that whitewashed how the kiss was nonconsensual. The truth, unfortunately, taints what’s long been seen as a perfectly romantic photo.

What’s most unsettling are the clues in the photo itself. The body language is off: his clenched fist, her body swept off balance. The caption that accompanied the photo when it appeared in LIFE hints at something less romantic too: “In the middle of New York’s Times Square a white-clad girl clutches her purse and skirt as an uninhibited sailor plants his lips squarely on hers.” She’s clutching at herself rather than embracing her kisser. The sailor is uninhibited because he’s drunk. But these details were lost in the happy, romantic narrative surrounding the photograph.

By the way, there actually is a photograph of a real couple, kissing after the sailor returns home. It’s this one.