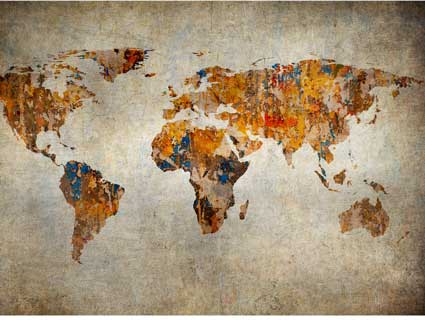 We had a debate club back in high school. Two teams would meet in the auditorium, and Mr. Garrity would tell us the topic, something 1970s-ish like “Resolved: Women Should Get Equal Pay for Equal Work” or “World Communism Will Be Defeated in Vietnam.” Each side would then try, through persuasion and the marshalling of facts, to clinch the argument. There’d be judges and a winner.

Today’s presidential debates are a long way from Mr. Garrity’s club. It seems that the first rule of the debate club now is: no disagreeing on what matters most. In fact, the two candidates rarely interact with each other at all, typically ditching whatever the question might be for some rehashed set of campaign talking points, all with the complicity of the celebrity media moderators preening about democracy in action. Waiting for another quip about Big Bird is about all the content we can expect.

But the joke is on us. Sadly, the two candidates are stand-ins for Washington in general, a “war” capital whose denizens work and argue, sometimes fiercely, from within a remarkably limited range of options. It was D.C. on autopilot last week for domestic issues; the next two presidential debates are to be in part or fully on foreign policy challenges (of which there are so many). When it comes to foreign—that is, military—policy, the gap between Barack and Mitt is slim to the point of nonexistent on many issues, however much they may badger each other on the subject. That old saw about those who fail to understand history repeating its mistakes applies a little too easily here: the last 11 years have added up to one disaster after another abroad, and without a smidgen of new thinking (guaranteed not to put in an appearance at any of the debates to come), we doom ourselves to more of the same.

So in honor of old Mr. Garrity, here are five critical questions that should be explored (even if all of us know that they won’t be) in the foreign policy-inclusive presidential debates scheduled for October 16th, and 22nd—with a sixth bonus question thrown in for good measure.

1. Is there an end game for the global war on terror?

The current president, elected on the promise of change, altered very little when it came to George W. Bush’s Global War on Terror (other than dropping the name). That jewel-in-the-crown of Bush-era offshore imprisonment, Guantanamo, still houses over 160 prisoners held without trial or hope or a plan for what to do with them. While the US pulled its troops out of Iraq—mostly because our Iraqi “allies” flexed their muscles a bit and threw us out—the war in Afghanistan stumbles on. Drone strikes and other forms of conflict continue in the same places Bush tormented: Yemen, Somalia, and Pakistan (and it’s clear that northern Mali is heading our way).

A huge national security state has been codified in a host of new or expanded intelligence agencies under the Homeland Security umbrella, and Washington seems able to come up with nothing more than a whack-a-mole strategy for ridding itself of the scourge of terror, an endless succession of killings of “al-Qaeda Number 3” guys. Counterterrorism tsar John Brennan, Obama’s drone-meister, has put it this way: “We’re not going to rest until al-Qaeda the organization is destroyed and is eliminated from areas in Afghanistan, Pakistan, Yemen, Africa, and other areas.”

So, candidates, the question is: What’s the end game for all this? Even in the worst days of the Cold War, when it seemed impossible to imagine, there was still a goal: the “end” of the Soviet Union. Are we really consigned to the Global War on Terror, under whatever name or no name at all, as an infinite state of existence? Is it now as American as apple pie?

2. Do today’s foreign policy challenges mean that it’s time to retire the Constitution?

A domestic policy crossover question here. Prior to September 11, 2001, it was generally assumed that our amazing Constitution could be adapted to whatever challenges or problems arose. After all, that founding document expanded to end the slavery it had once supported, weathered trials and misuses as dumb as Prohibition and as grave as Red Scares, Palmer Raids, and McCarthyism. The First Amendment grew to cover comic books, nude art works, and a million electronic forms of expression never imagined in the eighteenth century. Starting on September 12, 2001, however, challenges, threats, and risks abroad have been used to justify abandoning core beliefs enshrined in the Bill of Rights. That bill, we are told, can’t accommodate terror threats to the Homeland. Absent the third rail of the Second Amendment and gun ownership (politicians touch it and die), nearly every other key amendment has since been trodden upon.

The First Amendment was sacrificed to silence whistleblowers and journalists. The Fourth and Fifth Amendments were ignored to spy on Americans at home and kill them with drones abroad. (September 30th was the one-year anniversary of the Obama administration’s first acknowledged murder without due process of an American—and later his teenaged son—abroad. The US has similarly killed two other Americans abroad via drone, albeit “by accident.”)

So, candidates, the question is: Have we walked away from the Constitution? If so, shouldn’t we publish some sort of notice or bulletin?

3. What do we want from the Middle East?

Is it all about oil? Israel? Old-fashioned hegemony and containment? What is our goal in fighting an intensifying proxy war with Iran, newly expanded into cyberspace? Are we worried about a nuclear Iran, or just worried about a new nuclear club member in general? Will we continue the nineteenth century game of supporting thug dictators who support our policies in Bahrain, Saudi Arabia, Egypt, and Libya (until overwhelmed by events on the ground), and opposing the same actions by other thugs who disagree with us like Iraq’s Saddam Hussein and Syria’s Bashar al-Assad? That kind of policy thinking did not work out too well in the long run in Central and South America, and history suggests that we should make up our mind on what America’s goals in the Middle East might actually be. No cheating now—having no policy is a policy of its own.

Candidates, can you define America’s predominant interest in the Middle East and sketch out a series of at least semi-sensical actions in support of it?

4. What is your plan to right-size our military and what about downsizing the global mission?

The decade—and counting—of grinding war in Iraq and Afghanistan has worn the American military down to its lowest point since Vietnam. Though drugs and poor discipline are not tearing out its heart as they did in the 1970s, suicide among soldiers now takes that first chair position. The toll on families of endless deployments is hard to measure but easy to see. The expanding role of the military abroad (reconstruction, peacekeeping, disaster relief, garrisoning a long necklace of bases from Rota, Spain, to Kadena, Okinawa) seems to require a vast standing army. At the same time, the dramatic increase in the development and use of a new praetorian guard, Joint Special Operations Command, coupled with a militarized CIA and its drones, have given the president previously unheard of personal killing power. Indeed, Obama has underscored his unchecked solo role as the “decider” on exactly who gets obliterated by drone assassins.

So, candidates, here’s a two-parter: Given that a huge Occupy Everywhere army is killing more of its own via suicide than any enemy, what will you do to right-size the military and downsize its global mission? Secondly, did this country’s founders really intend for the president to have unchecked personal war-making powers?

5. Since no one outside our borders buys American exceptionalism anymore, what’s next? What is America’s point these days?

The big one. We keep the old myth alive that America is a special, good place, the most “exceptional” of places in fact, but in our foreign policy we’re more like some mean old man, reduced to feeling good about himself by yelling at the kids to get off the lawn (or simply taking potshots at them).

During the Cold War, the American ideal represented freedom to so many people, even if the reality was far more ambiguous. Now, who we are and what we are abroad seems so much grimmer, so much less appealing (as global opinion polls regularly indicate). In light of the Iraq invasion and occupation, and the failure to embrace the Arab Spring, America the Exceptional, has, it seems, run its course.

America the Hegemonic, a tough if unattractive moniker, also seems a goner, given the slo-mo defeat in Afghanistan and the never-ending stalemate that is the Global War on Terror. Resource imperialist? America’s failure to either back away from the Greater Middle East and simply pay the price for oil, or successfully grab the oil, adds up to a “policy” that only encourages ever more instability in the region. The saber rattling that goes with such a strategy (if it can be called that) feels angry, unproductive, and without any doubt unbelievably expensive.

So candidates, here are a few questions: Who exactly are we in the world and who do you want us to be? Are you ready to promote a policy of fighting to be planetary top dog—and we all know where that leads—or can we find a place in the global community? Without resorting to the usual “shining city on a hill” metaphors, can you tell us your vision for America in the world? (Follow up: No really, cut the b.s and answer this one, gentlemen. It’s important!)

6. Bonus Question: To each of the questions above add this: How do you realistically plan to pay for it? For every school and road built in Iraq and Afghanistan on the taxpayer dollar, why didn’t you build two here in the United States? When you insist that we can’t pay for crucial needs at home, explain to us why these can be funded abroad. If your response is we had to spend that money to “defend America,” tell us why building jobs in this country doesn’t do more to defend it than anything done abroad.

Now that might spark a real debate, one that’s long, long overdue.

Peter Van Buren, a 24-year veteran Foreign Service Officer at the State Department, spent a year in Iraq. Now in Washington and a TomDispatch regular, he writes about Iraq, the Middle East, and US diplomacy at his blog, We Meant Well. Following the publication of his book We Meant Well: How I Helped Lose the Battle for the Hearts and Minds of the Iraqi People (the American Empire Project, Metropolitan Books), the Department of State began termination proceedings, stripping him of his security clearance and diplomatic credentials. Through the efforts of the Government Accountability Project and the ACLU, Van Buren instead retired from the State Department with his full benefits of service. To stay on top of important articles like these, sign up to receive the latest updates from TomDispatch.com here.