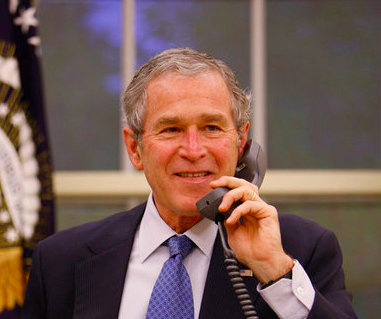 Judging by Tuesday night’s debate, the 2012 election is all about wining, dining, and seducing small business owners. At the town hall event, President Obama and Mitt Romney said the phrase “small business” a collective 21 times. But when it comes to promises to small business owners, Romney is like that prom date you rejected senior year. He’s showing up to your house again in a better suit, but trying to woo you with the same, sweaty cologne: Eau de George W. Bush.

Romney has promised to permanently extend Bush’s 2001 and 2003 tax cuts for the rich, and the 2012 nominee’s rhetoric is strikingly similar to Bush’s. At a 2008 Small Business Summit, Bush told small business leaders:

“The last thing small business owners need is higher taxes. I believe strongly that to make sure this economy recovers and stays strong, there needs to be certainty in the tax code. And the best way for Congress to make sure there’s certainty is to make the tax relief we passed permanent.”

In last night’s debate, Romney echoed Bush’s words: “Why do I want to bring rates down and at the same time lower exemptions and deductions, particularly for people at the high end? Because if you bring rates down, it makes it easier for small business to keep more of their capital.”

Like Bush, Romney is claiming these massive tax cuts can be offset, but hasn’t demonstrated how he will do it.

“That’s the unspecified part of the plan,” says Joseph Rosenberg, research associate at the Urban Institute. “It’s hard to know how it will play out.”