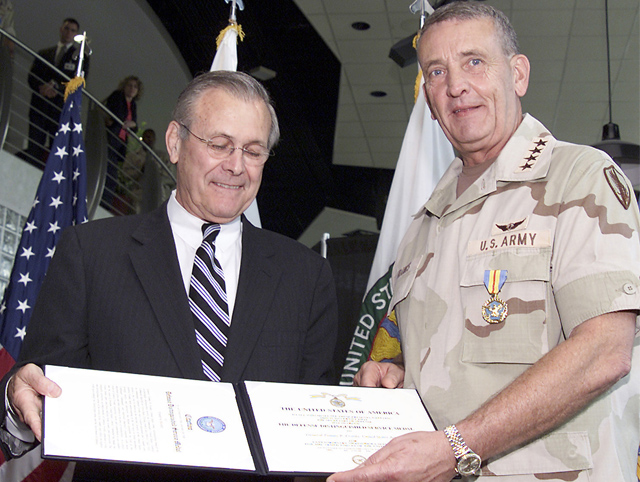 If you’re a presidential candidate looking to establish your national security cred with a war-weary American public, who might be the worst frontman you could choose for your cause? How about the guy who oversaw the campaign that lost Osama bin Laden at Tora Bora, then bungled planning for war in Iraq? In a news release Wednesday night, Mitt Romney announced the 300-plus members of his “Military Advisory Council,” and that man led the list of endorsements:

“I’m proud to be supporting Mitt Romney in this critical election about our nation’s future,” said General Tommy Franks, USA (Ret.), Past Commander, U.S. Central Command. “Governor Romney is committed to restoring America’s leadership role in the world. Instead of playing politics with our military, he will strengthen our defense posture by reversing the President’s devastating defense cuts. The fact of the matter is that we cannot afford another four years of feckless foreign policy. We need level-headed leadership which will protect our interests and defend our values with clarity and without apology.”

Few living Americans can speak with as much authority about “years of feckless foreign policy” as can Tommy “Rumsfeld’s water boy” Franks, who comes in at No. 4 on a Foreign Policy list of worst US generals ever. As readers of our lie-by-lie Iraq timeline will recall, Franks oversaw CENTCOM from 2000 to 2003 and scripted the initial conduct of the wars in Afghanistan and Iraq. Franks:

In his retirement, Franks maintains the General Tommy Franks Leadership Institute and Museum out of a Hobart, Oklahoma, storefront. (They now accept PayPal.) Also, Franks would like to sell you some “high performing mother cows” from his ranch, online at 4StarRanch.net.

So what does Franks’ role in the campaign tell us about national security policy in a Romney administration? Perhaps further overseas adventures would be in store, although given the lack of details from Romney regarding his vision for global affairs, it remains anybody’s guess.