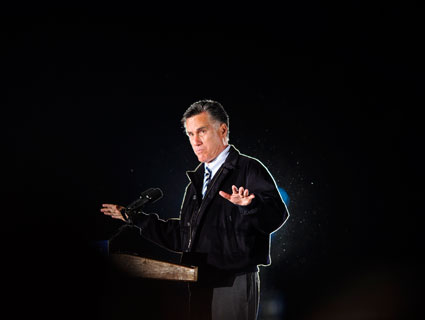 Ever since I revealed Mitt Romney’s 47 percent rant, tips and tapes have come through the transom—including this and this. And another source who asked not to be identified just sent me an audio recording of a private Mitt Romney fundraiser from earlier this year. At this event, Romney didn’t decry half of the nation, but he and Ann Romney each expressed disdain for President Barack Obama, with the Republican presidential candidate asserting that Obama considers businesspeople “a necessary evil” and his wife suggesting that the president was not a “grown-up.”

On March 27, as Romney was still fighting for the Republican presidential nomination, he and Ann attended a fundraiser in Irvine, California, at the home of Michelle and David Horowitz, a former cement business owner who runs a private equity fund. The $1,000-per-plate outdoors luncheon (or $2,500 for those wanting to participate in a photo reception with Romney) drew much of Orange County’s Republican elite.

Romney mainly delivered his standard stump speech to the 100-person-plus crowd, and he took only three questions. During the more intimate $50,000-per-plate 47 percent fundraiser in May, Romney didn’t give much of a speech, and he spent most of his time with these superdonors responding to their queries. (The bigger contribution apparently earns donors more quality time with the candidate.) But at the Horowitzes’ home in the exclusive Shady Canyon neighborhood, Romney did make several revealing comments.

After being introduced, the Republican candidate noted that he had been pushed into his second campaign for president by his wife:

David, you mentioned Ann, and the fact that she insisted that I get in this race. That is the truth. I wanted to talk it over with her. And every time I’d say, “Let’s talk about the pros and cons,” she’d say, “Talk to the hand, talk to the hand. We’re just doing this. We’ve got to do it.” And so she absolutely insisted that I get in this because she was convinced that I was the only one that had the capacity to beat President Obama.

Romney then asked Ann to say a few words, and she explained that she had been so insistent because she did not consider Obama to be a “grown-up”:

(This remark was not a one-off. In August, Ann Romney, talking about the gender gap, said, “I’m hearing from so many women that may not have considered voting for a Republican before that said, it’s time for the grown-up to come.”)

Romney’s pitch to this well-heeled O.C. crowd was heavy on celebrating entrepreneurs. He claimed that Obama and his supporters were opposed to success, declaring, “Heaven help us if we have people who try to divide America between those that have succeeded and those that haven’t.” And Romney, who possesses not one but two graduate degrees from Harvard, blasted Obama’s economic policies for being crafted by Ivy League experts:

What they have in their mind is a vision of America dominated by government, by individuals they respect, people like themselves: highly educated, spent a lot of time in the faculty club at Harvard, and they believe they can guide the economy better than can individuals all pursuing their own dream. It does make sense, after all, that smart people, bureaucrats can sit down and do a better job deciding which type of energy company to invest in, which type of technology to invest in, what kind of health care you should have, who’s your provider—all these smart people could do a better job. It makes all the sense in the world as opposed to saying individuals all doing whatever the heck they want, some without education, can go off and build businesses and succeed or fail. And yet that of course, that latter model, is the only one in the history of the world that’s ever worked to lift people out of poverty and create permanent prosperity.

Romney repeated his usual found-to-be-false talking points: Obamacare is a government takeover; if it stands, half of the US economy will be “controlled by government.” He accused the president of conspiring to cause high energy prices. (“Look, these guys are trying to drive up the price of energy in this country in order for solar and wind to be able to be more economic.”)

He dramatically cast the election as a black-and-white contest with Obama waging a “war on business and economic freedom.” Romney repeatedly professed his “love” for business and, in particular, the business people before him. Using supercharged rhetoric, he said that Obama had a beef against such people and viewed them as “a necessary evil—and maybe not so necessary”:

I’m convinced that if this president is reelected, the war on business and economic freedom will continue. I don’t think the president likes you very much. If you’re in business, I think he looks at you as a necessary evil—and maybe not so necessary. I love you, all right? I love, I love business. I love people who employ other people, who have dreams and ideas, and are willing to start enterprises, and put people to work—all good things grow from successful enterprises. Businesses—good jobs come from good businesses.

Romney went on to bemoan the fact that some businesses preferred to set up shop in China than the United States, but without mentioning that this is often because China has low wages and weak labor rights and environmental protections:

When I heard the head of Coca-Cola say that the business environment in America is less hospitable than the business environment in China, I knew we had a problem. I want to make sure that America has the most attractive business conditions in the world—that every entrepreneur once again says, “I want to be an American.” Whether it’s energy or regulation or tax policy or labor policy or legal policy or health care policy—I want America to be the best place for business.

This seemed a clear indication that Romney would place workplace conditions, environmental protections, and other safeguards a far second to industry imperatives. Moments later, the crowd applauded him enthusiastically.

During the brief Q&A, Romney hailed fracking and denounced the new START treaty Obama negotiated with the Russians as kowtowing to Moscow (though 71 senators voted for its ratification). But perhaps his most heartfelt remark came when he was concluding his talk and told these donors, “I want to let you go back to work so you can earn more money to give to me.”

You can listen to the full tape here.

UPDATE: A source who attended the event says there were over 400 people in attendance.