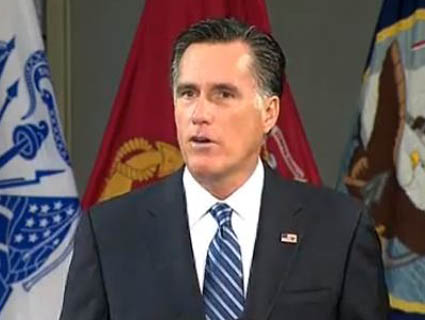 The reviews of Mitt Romney’s “major foreign policy speech” at the Virginia Military Institute Monday are all saying pretty much the same thing: Romney said nothing he hasn’t already said, and much of what he said mirrors the current administration’s policy. Romney’s speech, however, seems to have focused less on introducing new policies as introducing a new Mitt.

Romney’s speech took direct aim at the center of Obama’s foreign policy pitch: This president is directly responsible for killing Osama bin Laden and driving Al Qaeda to the brink of defeat. Romney drew a clear link between Al Qaeda and the attack on the US consulate in Benghazi, Libya, saying the assault was “the work of forces affiliated with those that attacked our homeland on September 11th, 2001.” It’s still unclear who exactly is responsible for the attack and to what extent they’re connected to Al Qaeda, but the point Romney is making is that Obama didn’t finish the job, and he will.

Romney walked into last week’s presidential debate in Denver with a clear mission: to erase the image of the heartless rich guy promoted by the Obama campaign and bolstered by the secret fundraising video published by Mother Jones, in which he dismisses half the country as unwilling to take responsibility for their lives. To that end, he deployed his best Bill Clinton impression, peppering his arguments with anecdotes about a suffering American middle class. No matter that some of Romney’s anecdotes featured individuals whom his policies would not help (Romney has opposed intervention in the housing market, but mentioned a woman whose family lost their home), and he misled the audience about his agenda on taxes, Medicare, and health insurance coverage of individuals with preexisting conditions.

Whether the first debate was a lasting turning point in the race has yet to be seen, but judging from shifts in post-debate polling, he convinced at least a few voters that the initial impression they had of Mitt was wrong, a conclusion that makes them both more sympathetic to Romney and more distrustful of Obama. Romney in the debate was simply not the Romney they’d heard about. His foreign policy speech Monday was all about keeping Debate Romney at the forefront of voters’ minds.

As far as foreign policy is concerned, the Romney campaign has had difficulty saying what he’d do differently from the current president beyond rhetorical invocations of “strength” and a dubious insistence that somehow, a Romney administration could better “shape events” toward American interests in the Middle East. (This should give liberals pause as to what, exactly, the Obama administration stands for on foreign policy.)

As in the debate, however, Romney’s address Monday was less about a clear contrast in policies than a clear contrast in images. With the memory of the stammering, weak Obama who showed up in Denver still fresh in some voters’ minds, Romney is hoping to capitalize on his performance in a manner that makes him seem more plausible as president, and that can persuade people that he will be a “stronger” commander-in-chief than the guy who ordered the raid that took out bin Laden.

To those who pay close attention to foreign policy debates, Mitt Romney said little new. To the voters giving him a second look, he was saying, “allow me to reintroduce myself.”