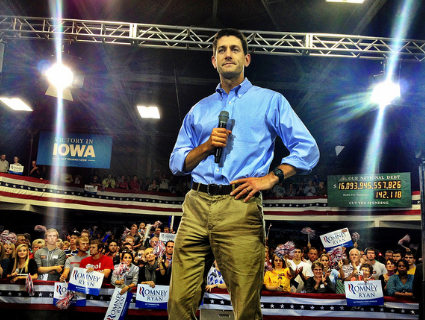 Buzzfeed‘s Andrew Kaczynski flagged this video on Monday afternoon, in which an agitated Rep. Paul Ryan chides a Michigan television reporter for a particularly loaded line of questioning. But I was more interested in what Ryan actually said.

Pressed on whether he supported new restrictions on gun ownership, Ryan responded: “If you take a look at the gun laws we have, I don’t even think President Obama’s proposing more gun laws. We have good strong guns laws—we have to make sure we enforce our laws, we have lots of laws that aren’t properly enforced. We need to make sure we enforce these laws.”

By contrast, take a look at this new ad from the National Rifle Association:

And here’s Paul Ryan himself, in an interview with Outdoor Life magazine in September: “What I worry about as a hunter, as a person who believes in the Second Amendment, as a gun owner, is knowing that President Obama—in his earlier career, prior to his presidency—was an advocate for gun control. I worry about what his attitude will be once he never has to face voters again.”

President Obama isn’t proposing new gun laws. In fact, the only gun-related pieces of legislation he’s signed into law have actually expanded gun rights. Caught in a defensive moment in a local news interview, even Ryan seems to admit it.