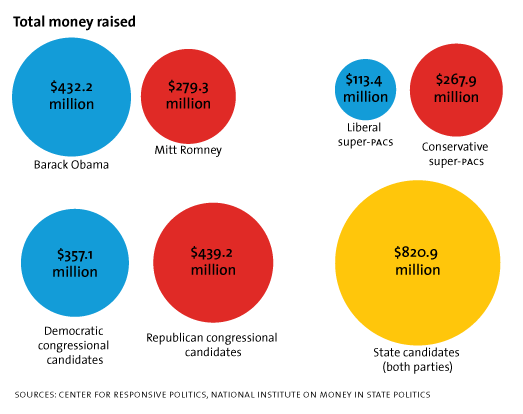 “The difference in ad rates alone could end up being very important…It looks to be a huge benefit for Obama in the long run.”
—Wesleyan Media Project codirector Michael Franz, on how the Obama campaign’s cash advantage has given the president greater control over advertising than the more super-PAC-reliant Romney, by taking advantage of cheaper ad rates offered to candidates. An Ohio ad buy that cost a conservative super-PAC $900, for instance, cost the Obama campaign just $125 for a similar spot. As a result, more pro-Obama ads have aired in crucial swing states.

As the presidential race hits the home stretch, Karl Rove’s American Crossroads super-PAC continues to hit Obama hard. A new ad claims that Obama will increase taxes on small businesses and add to the federal debt while costing more Americans their jobs. “Another four years focused on everything but jobs?” the ad asks. “No thanks.” It’s running in the battleground states of Colorado, Florida, North Carolina, and Ohio, a state that Obama has consistently held a small lead in and could be the deciding factor in the race to 270 electoral votes.

$1 million: You may have heard the allegations that the Obama campaign has been accepting illegal foreign donations, a story first debunked in 2008, then again this week. There’s no evidence Obama has accepted donations from abroad, but the law is murkier when it comes to companies donating to outside groups, which may in fact have skirted the rules to accept foreign cash. Case in point: In August, the pro-Romney super-PAC Restore Our Future received $1 million from Connecticut reinsurance company OddyseyRe, a “wholly owned subsidiary” of a Canadian insurance firm. While foreign nationals are prohibited from donating to any group influencing a US election, the law post-Citizens United isn’t so clear when it comes to domestic subsidiaries of foreign companies.

race of the week

Democratic challenger Elizabeth Warren is neck-and-neck in her race against Massachusetts Republican Sen. Scott Brown. The two are running fairly even in money spent for and against them by outside groups in 2012, which has been limited by a “people’s pledge” between the two candidates meant to prohibit the groups from running ads. Over the past two years, however, two outside groups supporting Warren, the League for Conservation Voters and the League of Women voters, have spent more than $4 million on mailers and other get-out-the-vote efforts like door-hangers (below). That’s more than double what Rove’s Crossroads super-PAC/nonprofit network has spent on various ads including robocalls. 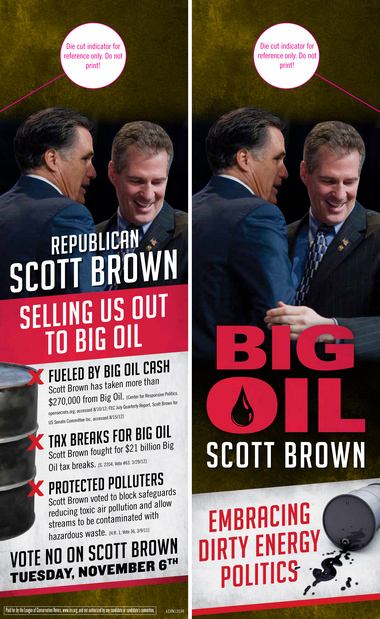 • Why Did This Clean-Energy Group Fund a Pro-Coal, Pro-Oil Outfit?: The Energy Foundation sponsors the Sierra Club, Earthjustice…and a nonprofit that pushes fossil fuels and opposes environmental regulation.
• Scoop: Ben & Jerry’s Cofounder Wants to Freeze Money in Politics: Ice cream magnate Ben Cohen wants to lick Citizens United, one dollar bill at a time.
• Would an Obama Win Hurt Campaign Finance Reform?: If the president raises $1 billion and beats the super-PACs, will it undermine efforts to roll back Citizens United?
• Can This Super-PAC Stop Tammy Duckworth’s Surge?: The Now or Never super-PAC thinks millions of dollars can save Rep. Joe Walsh’s seat. Is it right—or delusional?

• A look at the corporate lobbyists behind most of the pro-Romney super-PACs. The Nation
• 70 percent of the $174 million spent by Karl Rove’s American Crossroads super-PAC and its affiliated Crossroads GPS 501(c)(4) has come from anonymous donors. Sunlight Foundation
• A new collaborative effort by the Sunlight Foundation and Free Press tracks political TV ads. Political Ad Sleuth