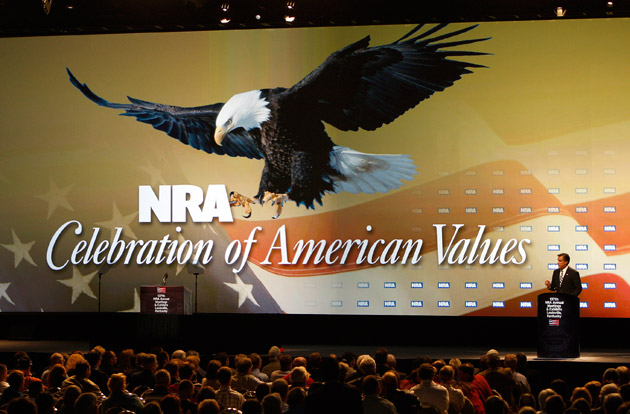 When Mitt Romney and Barack Obama square off in the first presidential debate in Denver, they’ll be doing so just a few miles from where a heavily armed young man unleashed a bloodbath inside a movie theater less than three months ago. It’s unlikely that guns—and more specifically the frightening rise in mass shootings—will be a topic of debate on Wednesday night. But some survivors are pressing the candidates to explain what they intend to do about America’s gun violence.

Other than expressing sorrow and general concern after the slaughter in the Denver suburb of Aurora in July, Obama has said little as president on the subject of guns. (His reticence has done nothing, of course, to reduce long-running chatter on the right that he has nefarious plans to disarm America en masse, a fear that Paul Ryan himself plays to on the campaign trail.)

The NRA surge: 99 laws rolling back gun controls in 37 states.

Romney, on the other hand, has eagerly courted the pro-gun crowd. In a lengthy interview in September with Chris Cox, the chief lobbyist for the National Rifle Association, Romney aimed all the way to the right on an alleged United Nations plot to take away Americans’ firearms. “I am troubled by this…I will never support or enforce any treaty that attempts to restrict our fundamental rights,” he replied to a question about the discredited conspiracy theory. He also endorsed federal legislation that would allow concealed weapons to be carried nationwide, and called for Attorney General Eric Holder to be fired over the Fast and Furious scandal-that-wasn’t.

Moreover, Romney vowed that as president he would not back “any additional laws to restrict the right to keep and bear arms.” Never mind that as governor of Massachusetts he signed a permanent ban on assault weapons similar to the federal legislation that expired in 2004.

Two survivors of recent mass shootings and the relatives of two victims want Romney to consider their perspective. On September 17, they sent a letter via email to the Republican candidate asking him for an opportunity like the one Cox got to ask Romney questions. “??The truth is that while mass shootings get headlines, an average of 34 Americans are murdered every day with guns, most often by people who should never have had them in the first place,” they wrote in the letter, a copy of which was provided to Mother Jones. “That’s 12,000 of our fellow citizens every year—a staggering toll that could be reduced though common-sense solutions like better background checks and stronger enforcement of current laws.”

“Like most Americans,” they continued, “we strongly support the Second Amendment and the rights of law-abiding gun owners. And like most Americans, we believe our elected officials have a responsibility to do much more to keep guns out of the wrong hands.??”

Despite two follow-up phone calls to the Romney campaign, they’ve gotten no response to date, one of the signees told me. (See the full text of the letter below.)

Among the four who wrote to Romney was 22-year-old Stephen Barton, who was wounded during the nightmare in Aurora. Barton also appears in a new ad released in collaboration with Mayors Against Illegal Guns, a national coalition led by Michael Bloomberg seeking more effective regulations—regardless of who the next president may be—to keep firearms out of criminals’ hands.

“This past summer in a movie theater in Colorado, I was shot in the face and neck,” Barton says in the poignant spot, revealing his fresh scars for the camera. “But I was lucky.”

Here is the full text of the letter sent by Barton and the others to Romney:

Last week, we learned that you met with Chris Cox, the Washington lobbyist for the National Rifle Association, to answer questions about his organization’s priorities.  We respectfully write to ask for equal time.  We hope you will meet to hear about our personal experience with gun violence, to discuss our views about gun policy, and to tell us your strategy to reduce gun violence in America.??

We are survivors of recent mass shootings in Virginia, Colorado, and Arizona, and the families of its victims. We have witnessed firsthand the consequences of weak, poorly enforced laws that allow criminals, the seriously mentally ill and dangerous people to get their hands on guns. After the bloodshed in Aurora, we joined other survivors and families in calling on both you and President Obama to offer a concrete plan for stopping the next mass shooting, and saving some of the 48,000 Americans who will be murdered with guns in the next president’s term unless Washington finally acts.

??The truth is that while mass shootings get headlines, an average of 34 Americans are murdered every day with guns, most often by people who should never have had them in the first place. That’s 12,000 of our fellow citizens every year—a staggering toll that could be reduced though common-sense solutions like better background checks and stronger enforcement of current laws.

We look forward to your response, and hope we can have a constructive conversation about how we can make America safer.???