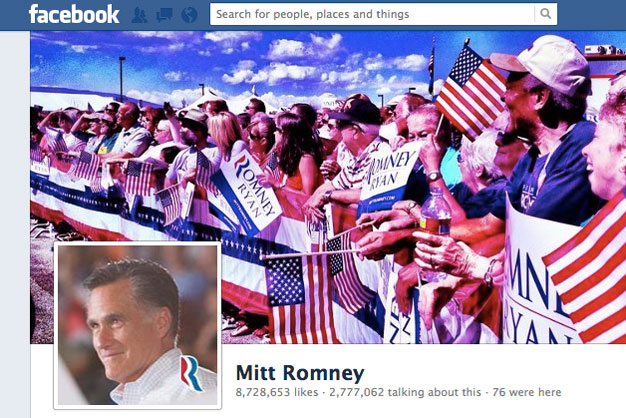 It is not just conservatives who have been forced to like Mitt Romney. In recent weeks, a host of liberal types have complained that their Facebook accounts have erroneously “liked” Romney’s page, and some are floating the theory (see here and here and here) that the Romney campaign has deployed a virus or used other nefarious means to inflate the candidate’s online stature. This conspiratorial notion has spawned a Facebook community forum, and its own page: “Hacked by Mitt Romney” (cute url: facebook.com/MittYouDidntBuildThat), which has over 200 likes. It even inspired an editorial in the St. Louis Post-Dispatch, which pondered: “Was I the victim of sabotage (like the time one of our kids swiped about 100 campaign signs and posted them all in our front yard)? Or the victim of my own keyboard clumsiness?”

Romney’s social-media presence has been associated with some tech trickery in the past. After all, there was that whole thing back in July, when Romney’s Twitter followers spiked an improbable 17 percent in one day. (Analysts decided a huge number of the new followers were fake, but couldn’t determine their origin.) But is there any credence to claims the Romney campaign is hacking Facebook?

After chatting with some of the afflicted, some hacker types, and a Facebook rep, it looks like this issue is largely a result of Facebook’s mobile interface kind of sucking.

Bill Pennington, an internet security expert, suggested the phantom likes could be the result of “clickjacking,” in this case hiding a Romney ad behind an unrelated ad, which would result in a Romney like. But he said the only way to determine who was behind those likes would be for Facebook to investigate its database.

So we asked the social-networking company to do that. Facebook agreed, and had a team research the issue. They concluded that users are probably liking the Romney page on a mobile device by either accidentally clicking on a Romney ad or a “sponsored story” from the Romney campaign in their news feed. Facebook spokesman Andrew Noyes said the issue is unique to mobile because of the way the app works on small screens, and rejected the idea that the Romney camp was engaging in clickjacking. He added that the company is currently working to clean up its mobile interface. (The Obama camp is reportedly experiencing Facebook funny business too. On Tuesday, Buzzfeed noted the president’s page saw an odd spike in likes.)

It’s possible that some of the Romney likes could still be fraudulent. As PCWorld noted, Facebook “is still gamed: users can be tricked into liking something, malicious software can be used to infiltrate accounts and other scammers have set up businesses selling ‘Likes’ in bulk in violation of Facebook’s terms of service.” In response to general annoyance over this trend, Facebook announced in late August it would crack down on fake likes, saying in a statement: “We have recently increased our automated efforts to remove Likes on Pages that may have been gained by means that violate our Facebook Terms.”

So, unless some more compelling evidence surfaces, let’s file this under Hankygate.