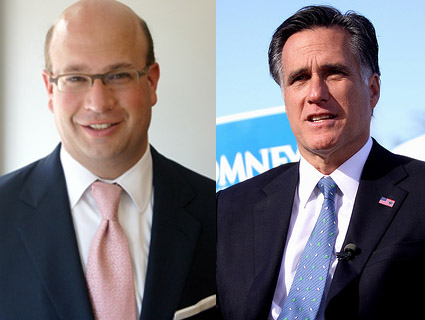 Charlie Spies is not a household name. He prefers it that way. But this DC lawyer and longtime ally of Mitt Romney’s has left his mark on the 2012 presidential race as much as any one political operative could hope to. His super-PAC steamrolled the competition during the wacky Republican primary, and it kept Romney alive at his most vulnerable point in the general election. If Romney wins next week, Spies could be rewarded with a prominent role in the Romney administration as a top aide or a trusted counsel. He may not stay little-known for long.

Spies—together with strategist Carl Forti and veteran ad-maker Larry McCarthy—cofounded Restore Our Future, the pro-Romney super-PAC. The group has blown its rivals out of the water in the money chase: It has raised a record $131.6 million and spent a record $107 million. On Tuesday, in the final stretch of the 2012 election, Restore Our Future unveiled a weeklong, $20 million ad blitz—the largest-ever single-race buy by a super-PAC, according to Spies. And when the Romney campaign found itself pinched for cash at the end of the summer, Spies and Restore Our Future spent $30 million throughout August on ads to blunt the Obama campaign’s attacks on Romney. “In the month of August, we were one of the key factors keeping Gov. Romney afloat,” Spies says. “That’s the time period that traditionally the underfunded candidate gets knocked out.”

Spies, 40, discussed Restore Our Future, money in politics, and his history with the Romneys over an hour-long interview at his office in a big, bright conference room—which Spies says once belonged to Al Gore—a few blocks from the US Capitol. Spies, wearing a dark tailored suit, red pocket square, and “MITT” cuff links, refuses to credit Restore Our Future for Romney’s late surge. (He chalks that up to Romney’s performance in the first debate on October 3 and his “leadership and vision” in the final weeks of the campaign.) But there’s no denying that Romney owes a debt to Spies and Restore Our Future—at the very least for keeping alive the possibility of any comeback at all. “They’ve been Romney’s Air Force,” says Bill Allison of the Sunlight Foundation, “all over the airwaves whenever he needs them to help his campaign.”

Spies is a Romney loyalist. Like Mitt, he grew up in Michigan. His dad worked as a US attorney—until President Jimmy Carter fired him. “I was too young at the time to understand how political appointees worked,” Spies once told a reporter, “I just knew that Jimmy Carter was a bad man.” He attended the University of Michigan in the early ’90s (his cellphone ringtone plays Michigan’s fight song, “The Victors”), and as an undergrad volunteered with the 1994 US Senate campaign of Ronna Romney, Mitt’s former sister-in-law, who lost in the GOP primary. Later, while at Georgetown law, he worked on Ronna’s ’96 Senate run, also unsuccessful. (Ronna divorced Scott Romney, Mitt’s older brother, in 1992.)

Spies went on to clerk at the National Republican Senatorial Committee, and then in 1999 plunged into the thicket of American election laws at the Federal Election Commission, where he advised chairman Darryl Wold. Wold remembers Spies as a “bright” and “energetic” attorney eager to climb the ranks of DC’s elite political lawyers. (Today Spies leads the Clark Hill law firm’s political law practice.) Spies’ says his FEC stint pitted him against the so-called “reform community”—the lawyers and activists fighting for tighter regulations on political money. He derides them as the “reform industry,” a self-interested crew that cares more about sounding righteous and squelching free speech than enforcing the law.

In 2005, Spies joined the Republican Governors Association as its first in-house attorney. There he left his mark in a big way. He and his team crafted a mind-bendingly complex money-moving machine that allowed the RGA to shuffle around the country the tens of millions it raised from big corporations and wealthy individuals. Spies’ strategy in effect sidestepped state laws banning corporate campaign cash, while maximizing the RGA’s impact. Campaign finance watchdogs, for their part, have slammed the RGA’s tactics as a legal “money-laundering scheme” and a “deliberate strategy to keep the public in the dark about who is really buying our elections.”

The effectiveness of that strategy is hard to argue: In 2010, the RGA targeted 10 races and helped Republicans win 9 of them. The group unloaded $132 million that cycle—more than the five biggest conservative super-PACs and nonprofit groups combined.

Mike Pieper, the RGA’s executive director in 2005, says Spies’ handiwork at the RGA shows he’s “a rare breed” of DC political operator. “Charlie is a great combination of a guy who knows the law but also has a very good political sense and really gets how campaigns work,” Pieper says.

Spies worked with Mitt Romney in 2005 and 2006, when Romney vice-chaired and then chaired the RGA. A few years later, Spies moved to Boston to control the purse strings on Romney’s presidential campaign as its chief financial officer. He misses his old Boston office and the friends he made on Team Romney, he told me. In between presidential campaigns, Spies hosted Mitt and “the Romney gang,” as he affectionately called other Romneyland alums, for an informal reunion on the terrace of his downtown Washington loft.

But Spies says that, along with fellow Romney ’08 alums Forti and McCarthy, he’s done far more to elect Romney with a super-PAC than he could in Boston as part of the campaign firmament. “Together we’ve probably been able to have more of an impact working through an independent group than any one person or a group of people could have within the structure of a large campaign,” he says.

At the outset, Spies says, Restore Our Future had one goal: help Romney win the GOP primary. The super-PAC pummeled then-front-runner Newt Gingrich with ads (some of them deemed misleading by fact-checkers) before the Iowa caucuses in January, paving the way for Romney’s caucus night victory. (Caucus organizers would later name Rick Santorum the winner, but that did little to slow Romney’s momentum.) In Florida, Restore Our Future mowed down the competition on the way to Romney’s critical primary win. In all, Restore Our Future spent $55 million during the primaries.

Once Romney had clinched the nomination, Spies and his team knew they needed to shore up Romney’s standing over the summer. Underfunded presidential candidates historically get hammered after locking up the nomination—so badly, in some cases, that they never recover. (Think Bob Dole in ’96, John Kerry in ’04, John McCain in ’08.) Spies warned his donors of this vulnerability; they responded by opened their wallets wide.

Casino tycoon Sheldon Adelson and wife, Miriam, ponied up $10 million in post-primary money for Restore Our Future. Texas homebuilder and GOP bankroller Bob Perry gave $6 million. In all, 14 people or corporations chipped in more than a million dollars since Romney won the nomination. (Spies refused to discuss any of his super-PAC’s donors.)

Restore Our Future’s historic spending hasn’t just kept Romney in the running; Spies believes it’s expanded the electoral playing field and given Romney more routes to 270 electoral votes. The super-PAC ran the first ads of the general election in Wisconsin in August, which Spies says helped nudge the state toward Romney. And the super-PAC continues to run ads in Michigan where, in Spies’s view, Romney, a native son, continues to be competitive. Spies points to RealClearPolitics‘ “toss-up” rating as evidence of Restore Our Future’s impact. (Not everyone agrees: the Cook Political Report rates Michigan “likely Democratic,” and polling guru Nate Silver gives Obama a 98.1 percent of winning there.)

Spies won’t discuss life after Election Day—the fate of Restore Our Future, his own plans. The days, hours, and minutes until polls close on November 6 are all that matter. But you don’t need to know the election’s outcome to see how Restore Our Future has rewritten the playbook for future presidential campaigns. As long as super-PACs are around, any serious presidential challenger will need one, with a roster of millionaires and billionaires to fill its coffers.

For that America has Restore Our Future—and Charlie Spies—to thank.