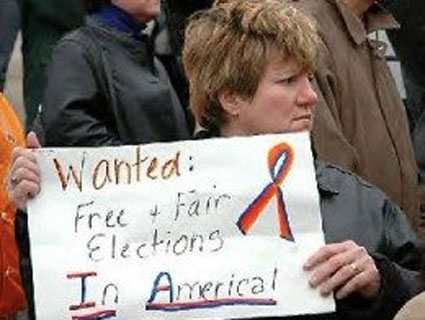 Last week, President Hamid Karzai got snippy with reporters about the possibility of Westerners monitoring his country’s election process: “Afghanistan is not interfering in their election, and we are hoping they don’t interfere in our election,” he said.

Karzai’s right that folks from Afghanistan won’t be monitoring US elections. But people from Kazakhstan will.

On November 6, the Office for Democratic Institutions and Human Rights (ODIHR) of the Organization for Security and Cooperation in Europe, a United Nations affiliate, has already deployed a team of 57 observers from 23 countries, including Serbia, Belarus, and Kazakhstan, to monitor voter suppression and learn about election administration, campaign finance, new voting technologies, and even our media environment.

International monitors are actually nothing new. ODIHR has kept an eye on US elections since 2002, at the invitation of the State Department, says ODIHR spokesperson Thomas Rymer. But now that the mere act of voting has become Civil-Rights-era politicized, that outside eye matters more.

Even though Democratic groups will have thousands of their own volunteer poll-watchers and lawyers out monitoring the polls, a bunch of civil rights groups like the NAACP and the ACLU have also specifically notified ODIHR of “a coordinated political effort to disenfranchise millions of Americans—particularly traditionally disenfranchised groups like minorities,” according to The Hill. The international observers will issue a report with their findings, including any issues civil rights groups raise, as well as recommendations that Rymer says they can help us follow up on if the State Department requests.

Catherine Engelbrecht, founder and president of True the Vote, the Americans for Prosperity-affiliated “grassroots” anti-voter fraud group, is none to happy about sharing the stage with foreigners. “The United Nations has no jurisdiction over American elections,” Engelbrecht, whose group plans to deploy hundreds of thousands of volunteers to hover over voters on Election day looking for fraud (even though there’s basically no evidence of it), said in a statement to The Hill.

As a member of the Organization for Security and Cooperation in Europe, however, the US has “committed since 1990 to hold free and democratic elections and to allow [other members] to observe their elections,” OSCE communications director Neil Simon told The Hill. Not only that, but ODIHR will be consulting with civil society groups from both sides of the political spectrum, as well as both political parties, members of the media, and government officials. “We meet with these groups not on any partisan basis. It’s strictly informational,” Rymer says.

So, in the event of a Bush-Gore-style close election in 2012, it looks like Democrats and Republicans won’t be the only ones arguing over the outcome. The whole world gets to be in on the smackdown.