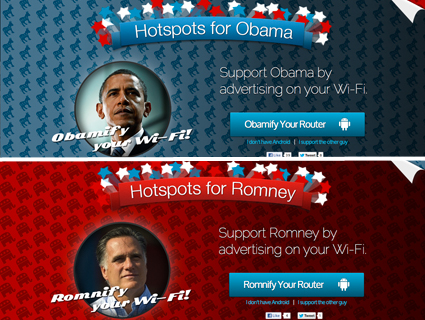 Feel like you’re undersaturated with campaign advertising? Need even more exposure to the slogans and smiling faces of our two major presidential contenders? When Alexey Komissarouk, a Bay Area programmer, wanted to add to the growing list of apps for political junkies, he designed a program that can give voters a bit more control over the web ads they see.

This week he and a few friends launched Hotspot the Vote, which harnesses Android devices to “Obamify” or “Romnify” WiFi routers so browsers will replace every ad (including ads for Amazon, Etsy, OkCupid, or whatever else you might normally see, along with ads for other politicians) with ads for your candidate.

“It’s like putting up a campaign poster in your living room,” he said. And while you might apprecitate being reminded of which candidate you’re rooting for with each and every banner ad, the program packs a bigger punch when installed on public routers: Komissarouk is pitching the tool to coffee shops and other spaces with open internet connections. It’s Obama or nothing at Philadelphia’s Trolley Car Diner, a 1950s-style eatery that owner Ken Weinstein said “Obamified” its free WiFi yesterday.

“We’re in a very liberal community,” Weinstein said. “Our choice to Obamify reflects our clientele.”

Still, Weinstein said the change didn’t equate to an official Trolley Car Diner endorsement of the incumbent, and rejected the suggestion that limiting online content for his patrons was a form of censorship: “They have a choice about whether to eat here, and about whether to sign in to our WiFi. As long as we’re providing it for free, I think that’s reasonable.”

Are there legal and ethical gray areas in taking the reins of your browser’s ad content?

“It’s a yard sign that obstructs other peoples’ yard signs,” Free Press‘s Josh Levy said. “But are people going to complain that they’re not seeing giant Lord & Taylor ads on the New York Times? If this was blocking access to information, that would be another ball of wax. But that doesn’t seem to be the case.”

A spokesperson for the Electronic Frontier Foundation agreed that the program represented little more than a variation on ad-blocking scripts that have existed for years.

But if you’ve had your fill of election 2012 ads by now, you might prefer one of those programs instead.