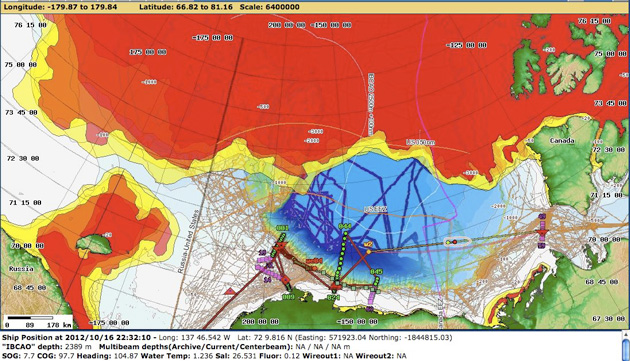 We’re currently on a long transit of nearly 500 miles (805 kilometers) across the Beaufort Sea. In the map above you can see Healy‘s position (ship icon) as of 22:32 Universal Time on 16 October.

We’ve crossed into Canadian waters and are currently about 164 nautical miles (188 miles / 303 km) north of the Mackenzie River Delta. If you look carefully at the map near the ship’s position you can see the demarcation line of the US Exclusive Economic Zone (EEZ). Not far away is the Canadian EEZ. Notice how they overlap.

Oh well, even the best of friends can argue.

The Canadians have been kind enough to allow us into their territorial waters to do research on this cruise. Bob Pickart, a physical oceanographer at the Woods Hole Oceanographic Institution and Principle Investigator aboard Healy, applied for the permits, both from Canada and from the First Nation communities on the North Slope. In return he has agreed to a timetable for releasing his data to them. 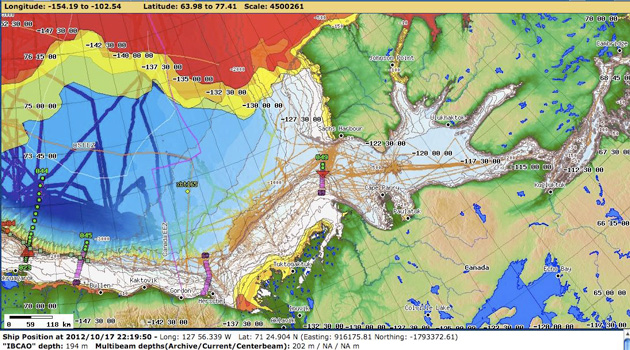 Amundsen Gulf and the entrance to the Northwest Passage

We’re headed to the mouth of the Amundsen Gulf between Banks Island (center map, top), the southwestern most island of the Canadian Archipelago, and the Canadian mainland. This body of water lies at the western entrance to the fabled Northwest Passage.

Bob wants to deploy a mooring in the mouth of the Gulf—the position is marked by the red triangle at center of map—to collect data for the next 12 months on what type of water is entering there and how quickly it flows.

Oceanographers know that Pacific water enters the Arctic Ocean via the Bering Strait and somehow winds its way across the Arctic to end up in the North Atlantic. There are different possible routes it could take. Bob’s question is whether or not any of it beelines east across the Beaufort Shelf into the Northwest Passage via the Amundsen Gulf. This mooring should answer that.

In case you’re wondering, the red and yellow in the maps is sea ice. More on that soon.