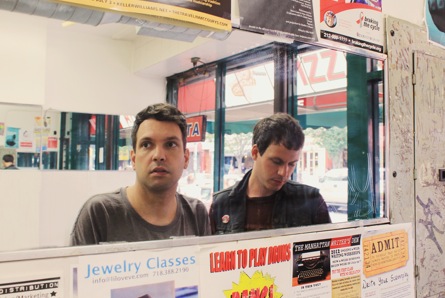 The first time you hear Black Marble’s debut album A Different Arrangement, which comes out this week, it sounds both instantly familiar and not quite like anything else you’re listening to. The Brooklyn darkwave duo, made up of Chris Stewart and Ty Kube, have earned frequent comparisons to the paradigmatic post-punk band Joy Division due to the ever-present synths, dark basslines, and general moodiness, all anchored by Stewart’s deep, morose voice—and to be sure, if a vocoder had an Ian-Curtis-underwater-on-codeine setting, this is what it would sound like. But in Black Marble’s hands, those elements are made smoother and poppier, filtered not through the jagged screen of punk rock but the softer lens of ’80s-era shoegaze and modern electropop.

The gorgeous “A Great Design” opens with a simple set of repeating, optimistically rising notes that are buoyed by upbeat drums and eventually joined by blurred, rippling synths; the nigh-unintelligible chorus is capped by a stringlike synth swell. Title track “A Different Arrangement” is more uptempo, with a darkly peppy bassline and intricate synth melody backing Stewart’s drone. The spare rat-a-tat beat of “Limitations” cuts through the melancholy, bell-like melody as Stewart pensively echoes “There’s no need to hide your/limitations/you’re wasting your time”; high, discordant chords close out the song. “Static” starts with a monotone bassline and windlike hissing of vibrating synths punctuated by a clanging metallic drumbeat, then breaks into a brisk beat while rich chords provide a base for the distant vocals. The final track, “Unrelated,” consists of birdlike chirps and single tones that reverberate through the ether, all anchored by a melody that builds suspense before gradually fading away. 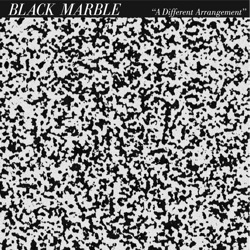 Most songs have a lot going on: beats that fade in and out; layer atop layer of synth; grand chords that add crests of drama; single notes that punctuate phrases momentarily; stylized, echoing drum machines; semi-ambient tones in the sort-of-background. Yet for all that, these songs never feels cluttered; Stewart and Kube may use a lot of sounds, but they’re incredibly precise, and the album sounds remarkably clean. So smooth, in fact, that it’s easy to lose track and realize you’re halfway through your second listen—and I mean that as a compliment. Each song stands on its own, and earworms abound, but the well-paced and sequenced tracks build on each other to create an enveloping atmosphere. Which is part of what makes A Different Arrangement a remarkably intimate, surprisingly warm album—Black Marble manages to hit the sweet spot of heartachingly dark and toe-tappingly catchy in a way that draws you in and keeps you there. I was hooked after the first song, and I can’t stop listening. But don’t take my word for it—check out “A Great Design” for yourself.