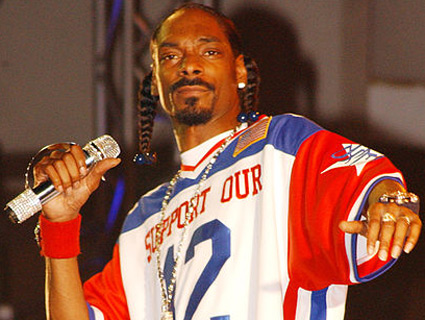 [George W. Bush] fucked up for eight years so you at least gotta give [Barack Obama] eight years. He cleaned up half the shit in four years realistically. It ain’t like you gave him a clean house. Y’all gave him a house with a TV that didn’t work, the toilet was stuffed up; everything was wrong with the house. [The American people] need to give Obama four more years.

If any of that sounds familiar, it’s probably because Bill Clinton basically said the exact same thing at the Democratic convention last week:

No president—not me or any of my predecessors—could have repaired all the damage in just four years. But conditions are improving and if you’ll renew the President’s contract you will feel it…[President Obama] inherited a deeply damaged economy, put a floor under the crash, [and] began the long hard road to recovery…[W]e have to re-elect President Barack Obama!

Snoop Dogg/Lion—who insists that he is the reincarnation of Jamaican singer-songwriter Bob Marley—has come a long way since 2008, when he accused then Sen. Obama of accepting money from the Ku Klux Klan. (Although Dogg/Lion also emphasized back then that “that muthafucker [Obama’s] gonna be the president cuz McCain can’t fuck with him. Hillary can’t fuck with him. He’s winning over white people, white ladies.”)

Earlier this year, the rap icon publicly offered to start hitting the bong with Obama. He and the president have some strong, longstanding disagreements regarding the drug war. But that hasn’t proved a deal breaker:

And the two go way back: Here’s footage from 2008 of Barack Obama dancing to a recording of Snoop Dogg’s hit single “Drop It Like It’s Hot”: