For a friendly venue in Northern Virginia playing host to a Republican presidential candidate, yesterday’s crowd at American Legion Post 176 was surprisingly small and low-key: Maybe 200 folks, mostly veterans in gold-piped garrison hats, crowded into the banquet hall to hear Mitt Romney give a boilerplate stump-speech.

Some supporters drove out to the suburban sprawl in style: 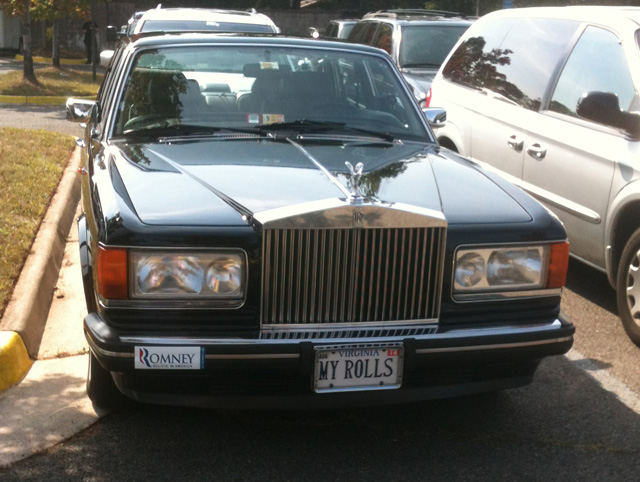 Rolls-Royces for Romney Adam WeinsteinAfter Romney completed his short, statistics-heavy stemwinder on the evils of Obamacare and defense sequestration, many in the crowd were more than happy to offer Mother Jones their opinions on Barack Obama, “liberal polls,” and Romney’s videotaped dismissal of the “47 percent,” first reported last week on this website.

Retired Air Force Major Joseph Smith said Romney’s “47 percent” remark held a kernel of truth, and the truth was that President Obama “wants to buy” poor people. And Smith should know, since he says he used to run an unemployment office:

Romney was simply saying that there are a good number of people in the country on the one hand that don’t pay taxes. They really don’t. But they get most of the welfare and those types of handouts. Most of them would rather actually be working. And the current administration wants to buy them so they can make them dependent on the government rather than working on their own. Which is totally the antithesis of anything that this country stands for…I used to work in unemployment, run an unemployment office, I saw it everyday. I used to run the office in Virginia for almost 30 years.

Smith added off-camera that he was currently a government contractor.

Outside, a former Legion post commander took issue with the idea that Mitt Romney is behind Obama the polls: “No, he’s not. He’s down in the liberal polls, but he’s not down in the ones that count. He’s not down in the polls at all. Matter of fact, he’s gonna carry Virginia in a landslide. And you can print that.”

He was applauded by another woman, a Vietnam-era Air Force vet who identified herself as Jo Watts, president of the Barbara Bush Republican Women’s Club. Romney’s 47 percent video, Watts said, was misrepresented:

He doesn’t feel that way except for…I take that back. He probably does feel that way. But he told the truth, and people don’t want to hear the truth…People on the dole. It’s like, how do people go off unemployment and go on disability? Where is that coming from? How did that happen? You’re not disabled just because you don’t have a job. We should be out there finding people jobs instead of scooting people from one dole to the other.

Nearby, Jim Bertine, a Navy vet and insurance agent for the Knights of Columbus, complained that “we don’t have the same government today as we used to have.” Asked about his highest priority in this election, Bertine responded:

Getting someone in that White House who will actually fight for the American citizen. For all the constitutional rights and responsibilities we have that are not very well taken care of by this current guy, who says—on oath!—he’ll swear to uphold the Constitution of the United States of America. It ain’t happenin’.

Despite his conservative convictions, Bertine had kind and somewhat nostalgic words for the magazine that uncovered Romney’s now-famous fundraiser video. “Oh, I used to read Mother Jones all the time,” he said, warmly. “I went to Berkeley, you know!”