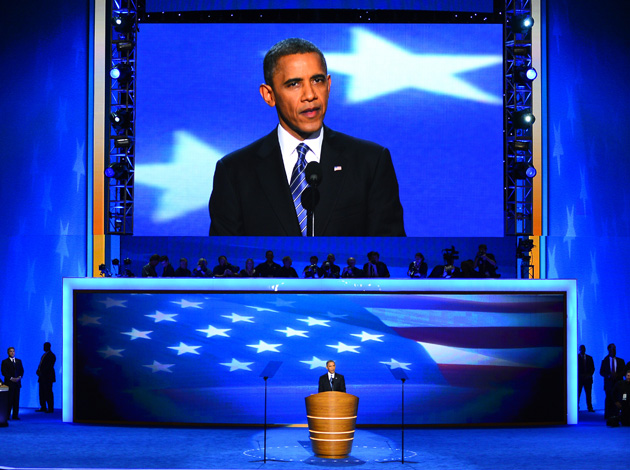 In the weeks after the November 2010 elections—which Barack Obama accurately called a “shellacking” for him and his party—the president thought long and hard about how to contend with the tea-partyized GOP that was on the march. He and his fellow Democrats had failed to keep their opponents at bay by arguing that John Boehner and the Republicans would drive the slowly recovering economy back into the ditch. He needed another line of argument. Within weeks, he had one: a war of values.

See our full coverage of the 2012 Democratic National Convention.

That was at the heart of his serious-minded and not quite soaring acceptance speech at the Democratic convention on Thursday night. He described the election as a pivotal choice:

On every issue, the choice you face won’t be just between two candidates or two parties. It will be a choice between two different paths for America. A choice between two fundamentally different visions for the future. Ours is a fight to restore the values that built the largest middle class and the strongest economy the world has ever known; the values my grandfather defended as a soldier in Patton’s Army; the values that drove my grandmother to work on a bomber assembly line while he was gone.

This is a case Obama has been building for almost two years. By early December 2010, he was telling his aides that he believed that the Republicans would pursue such an extreme political course that he would have the opportunity to shift the 2012 campaign from a referendum on his stewardship of the struggling economy to a competition between clashing sets of values. He would contrast the divide between his call for communal action (via government) to create jobs, to bolster infrastructure, education, and innovation, to preserve the social safety net, and to reduce the deficit through shared sacrifices (including raising taxes on the well-to-do) with the Republicans’ supposedly freedom-first crusade to crush government and protect high-income taxpayers.

Throughout his subsequent squabbles over budget cuts and the debt ceiling with the House Republicans—including Rep. Paul Ryan, the budget committee chair who was pushing a plan that would end the Medicare guarantee and impose draconian cuts in government services—Obama sought to tether the fight of the moment to this confrontation regarding values. In April 2011, he delivered a speech on debt reduction—he described it to aides as “values-based”—that blasted Ryan’s plan, noting that it “would lead to a fundamentally different America than the one we’ve known.” Ryan’s proposed budget, he said, offered “a vision that says if our roads crumble and our bridges collapse, we can’t afford to fix them. If there are bright young Americans who have the drive and the will but not the money to go to college, we can’t afford to send them.” Ryan’s plan, he insisted, was “deeply pessimistic.”

Months later, when he unveiled his $447 billion jobs bill in a speech to Congress, he slammed GOP values: the “notion that the only thing we can do to restore prosperity is just dismantle government, refund everybody’s money, and let everyone write their own rules, and tell everyone they’re on their own—that’s not who we are. That’s not the story of America.”

Last December, Obama continued to push this values talk with a speech in Osawatomie, Kansas, in which he derided the trickle-down economics of Republicans and maintained that rebuilding the economy “will require all of us to see that we have a stake in each other’s success.” That, he added, was a matter of “American values.”

There’s an old rule of thumb in politics: Every election is about the future. Obama is betting the White House on this.

In Charlotte, Obama placed this theme into an electoral context. He referred to his accomplishments without dwelling on them—the auto bailout, an increase in manufacturing jobs, a boost in renewable energy use, Wall Street reform, the bin Laden mission, ending the war in Iraq. And he denounced Republicans for a single-mindedness: “Have a surplus? Try a tax cut. Deficit too high? Try another. Feel a cold coming on? Take two tax cuts, roll back some regulations, and call us in the morning!” He turned the values contest into a glaring choice—he used the word “choice” 10 times—between two specific visions for future government action.

Asserting that government can be a force for good, he outlined a series of either/ors:

We can gut education, or we can decide that in the United States of America, no child should have her dreams deferred because of a crowded classroom or a crumbling school….We can give more tax breaks to corporations that ship jobs overseas, or we can start rewarding companies that open new plants and train new workers and create new jobs here.

All the choices Obama outlined were values-driven:

I refuse to ask middle class families to give up their deductions for owning a home or raising their kids just to pay for another millionaire’s tax cut. I refuse to ask students to pay more for college, or kick children out of Head Start programs, or eliminate health insurance for millions of Americans who are poor, elderly, or disabled—all so those with the most can pay less. I’m not going along with that. And I will never turn Medicare into a voucher.

The president said not much about himself or Mitt Romney, although he deftly exploited Romney’s failure at the GOP convention to mention Afghanistan or the US troops deployed there, and he dished out several zingers on the national security front. (“You might not be ready for diplomacy with Beijing if you can’t visit the Olympics without insulting our closest ally.”) He didn’t complain about Republican obstructionism. He didn’t present excuses for the slow recovery. He didn’t hype his first four years. He remained intent on describing the two alternative paths ahead:

This is the choice we now face. This is what the election comes down to. Over and over, we have been told by our opponents that bigger tax cuts and fewer regulations are the only way; that since government can’t do everything, it should do almost nothing. If you can’t afford health insurance, hope that you don’t get sick. If a company releases toxic pollution into the air your children breathe, well, that’s the price of progress. If you can’t afford to start a business or go to college, take my opponent’s advice and “borrow money from your parents.”

You know what? That’s not who we are. That’s not what this country’s about…We honor the strivers, the dreamers, the risk-takers who have always been the driving force behind our free enterprise system—the greatest engine of growth and prosperity the world has ever known. But we also believe in something called citizenship—a word at the very heart of our founding, at the very essence of our democracy; the idea that this country only works when we accept certain obligations to one another, and to future generations.

There’s an old rule of thumb in politics: Every election is about the future. Obama is betting the White House on this. Months ago, David Axelrod, the president’s chief strategist, told me, “Obama ran for president because he believed there was a confluence of problems that were a long time in the making, a consequence of rapid changes in communications, technology, and the economy. And the real question was, ‘Are we mature enough as a country to deal with that in a way that works for most Americans?'”

Once again, Obama is proceeding with a message of some sophistication: This election is not about venting; it is about selecting the path forward. And he’s hoping that voters—especially those few remaining undecided ones—will choose not to vent about the current state of the economy, will ignore the usual campaign silliness, and will carefully consider the alternatives before making an informed decision about what lies ahead.

Earlier in the evening, singer Mary J. Blige broke it down this way: “The message: We are all in this together.” Obama is asking voters to determine if that’s an American reality or just a hope.