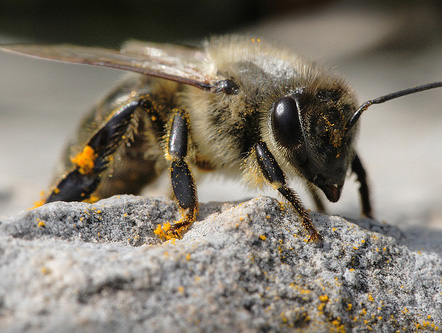 There are so many things in this world to be afraid of: hantavirus, brain-eating amoebas, the bubonic plague. Now you can add “zombie bees” to that list.

Beekeepers in Washington state have found bees whose bodies were taken over by apocephalus borealis, a type of parasitic fly that “causes the bees to lurch around erratically before dropping dead.” It’s really something straight out of a horror flick. While normal bees spent the night in their hives, infected bees are out on the prowl, exhibiting “zombie-like behavior” on “a flight of the living dead,” according to the website researchers have put together on the subject, ZomBee Watch. Here’s how the Seattle Times described what happens, per San Francisco State University biologist John Hafernik, the guy who first discovered the infected bees:

The fly’s life cycle is gruesomely reminiscent of the movie “Alien” — though they don’t pose a risk to people. Adult females, smaller than a fruit fly, land on the backs of foraging honeybees and use their needle-sharp ovipositors to inject eggs into the bee’s abdomen. The eggs hatch into maggots. “They basically eat the insides out of the bee,” Hafernik said.

After consuming their host, the maggots pupate, forming a hard outer shell that looks like a fat, brown grain of rice. When [Washington beekeeper Mark] Hohn looked in his Ziploc bag a week later, he saw several pupae — the smoking gun evidence that his bees were infected. He’s still waiting for the first adult flies to emerge from the shells, a process that takes three to four weeks.

The zombees were first documented in California in 2008. There are now confirmed instances of the afflicted bees in Washington, Oregon, and South Dakota, and sampling is taking place in five other states where cases are suspected. The project is a collaboration between San Francisco State University Department of Biology, the San Francisco State University Center for Computing for Life Sciences and the Natural History Museum of Los Angeles County.

Scientists are trying to figure out if the parasitic flies may be one of the reasons for Colony Collapse Disorder, a mysterious condition causing massive die-offs in honeybee populations.