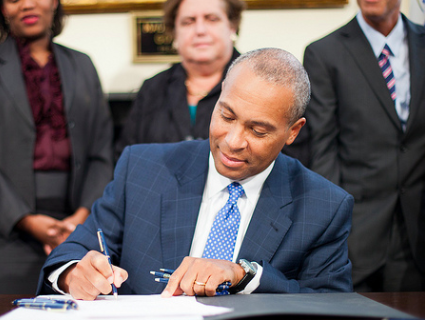 There was something missing from the Republican National Convention in Tampa last week, and Jim Roosevelt found it. “I’ve had a number of members of the press who were in Tampa comment to me how remarkable it was that in four days of convention compressed to three, there was never a mention of Governor Romney’s greatest achievement, and that is the health care legislation he passed in Massachusetts,” the DNC official told a gathering of Massachusetts delegates on Tuesday.

Democrats—and Massachusetts Democrats in particular—have spent a good portion of the last year or so arguing Romney was a failed governor who’d make a terrible president. But, at an industry-sponsored forum on the effects Romney’s landmark 2006 health care reform law (it was held on a wood-paneled room in the 47th-floor offices of health care lobbying firm K&L Gates), they had a different message: Thanks.

Massachusetts Gov. Deval Patrick, rattling off a list of statistics—98 percent of Massachusetts residents and 99.8 percent of kids now have insurance; 90 percent of residents have a primary care doctor—had nothing but praise for his predecessor. “The beauty of what happened was not that it was a perfect idea from the outset; it was that this broad coalition decided that there was a better solution than the usual two, which was a perfect solution or no solution at all,” he said. “Policy matters only at the point where it touches people in my view. And in that respect this policy matters. I am very proud of what we’ve done in Massachusetts. I think, by the way, Mitt Romney is too.” As proof, he pointed to Romney’s official portrait:

It’s kind of jarring sometimes to walk by and see him sitting, on my desk, with my pictures behind it. And they have painted in two things. One is a photograph on an easel of Mrs. Romney with forget-me-nots behind her. It’s very beautiful. And the other thing that’s painted in sitting next to Governor Romney on the desk is the health care bill. The health care bill!…There’s only one thing it could be. And at the time he acknowledged that’s what it was AND HE SHOULD HAVE! Because it’s done a lot of good for a lot of good people. There’s no doubt that in my mind that if the Affordable Care Act, based as you know on what he did in Massachusetts, were polling better nationally he would wrap his arms right around it.

As it stands, Massachusetts Democrats are happy to wrap Romney in a warm embrace of their own. It’s a buffer against the GOP nominee’s attacks on the Affordable Care Act Romney helped inspire—and a not-so-subtle reminder to skeptical conservatives that the Republican party’s nominee just isn’t one of them.