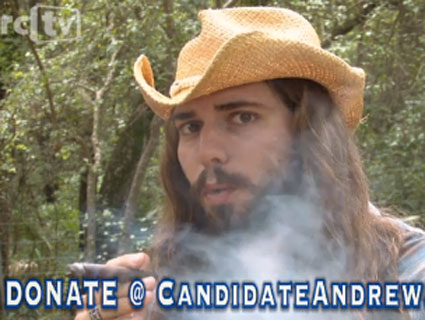 A long shot Kentucky House candidate with deep ties to a radical anti-abortion leader is broadcasting a campaign ad like no other: It purports to show images of dismembered fetuses and murdered Jews and Christians while comparing President Barack Obama to Adolf Hitler and mass-murderer Ted Bundy. The ad touts the candidacy of the long-haired self-described tea partier Andrew Beacham, who is running as an independent against Republican Rep. Brett Guthrie in Kentucky’s 2nd District.

Beacham is a longtime guerrilla-theater disciple of anti-abortion activist Randall Terry, whose strategy involves running for office and getting other people to run for office so that they can exploit loophole in the Federal Communications Commission’s indecency regulations. As my colleague Tim Murphy has reported, the loophole allows candidates to run graphic political ads that would otherwise be banned by the FCC.

Terry, who ran this year for president as a Democrat (and is still running as a no-chance independent for Congress in Florida’s 20th District), says the candidates he’s enlisted will spend between $250,000 and $1 million to run ads in seven races, according to the AP.

Possibly the weirdest part of Beacham’s ad—aside from the viscera and disregard for Godwin’s Law—is the candidate himself, wearing an undersized mesh cowboy hat and puffing on a cigar. “If you vote for Obama, the real question is what are you smoking?” he asks, before blowing smoke into the camera.