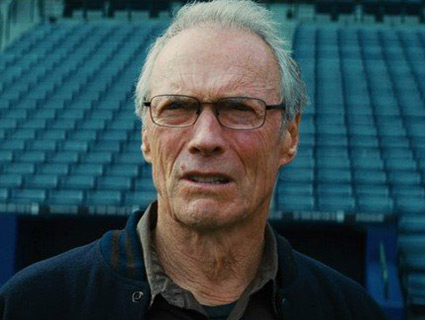 NOTE: There will be no empty chair jokes in this post. Yes, Clint Eastwood gave a circuitous, hilarious speech at the 2012 Republican National Convention as an old and slightly confused man. And just three weeks later, he has a new movie in theaters in which plays an old and slightly confused man. It practically begs for a torrent of lazy puns, headlines, and ledes. Almost all the film critics making their chair jokes are motivated by a misguided impulse to be clever, cute, and topical. (Emphasis on “misguided.”) Do. Not. Make. Them. You are better than that. (Also, if you’d like to hear more about this film, ThinkProgress critic Alyssa Rosenberg and I chat about it here.)

Clint Eastwood’s new movie came out today. It’s an ordinary but innocently enjoyable film about cigar-chomping baseball scout Gus Lobel (Eastwood, always worthwhile) and his daughter Mickey (the reliably wonderful Amy Adams, who is also in Paul Thomas Anderson’s The Master this week). Yogi Bear adaptation superstar Justin Timberlake shows up for some of the movie. Trouble is serviceable, but nothing special (for such so-so material, Eastwood was probably wise to produce and star, and turn over directing duties to Robert Lorenz).

At its better, non-sentimental moments, it’s simply Clint Eastwood continuing to elevate crotchety emoting to a level of art form.

1. “Don’t laugh. I outlived you, you little bastard.” — to his penis, as he urinates in the morning, struggling with an aged prostate.

2. “A bunch of goddamn midgets designed this garage!” — he soliloques, as his glaucoma interferes with his ability to back out of his garage without destroying everything in it.

3. “That’s ‘fang schmay!’ Don’t you know anything?” — mispronouncing “feng shui” while attempting to make excuses for why his living room is a holy mess.

4. “Computers? Anybody who uses computers doesn’t know a damn thing about [baseball]…You know what a computer can tell you? When to scratch your ass. What else do they tell you.” — as he rages all over the concept of computers.

5. “Crap, Tommy…Absolute crap…Goddammit.” — after a friendly bartender asks about his life.

7. “You are my sunshine, my only sunshine. You make me happy when skies are grey. You’ll never know, dear, how much I love you. Please don’t take your sunshine away.” — he sing-speaks to his wife’s grave while sipping a bottle of beer, butchering the lyrics to a classic ballad in the process.

8. “If this is a robbery, take everything you want…except for my flat-screen. Take my flat-screen, and I’ll kill ya.” — again, to his own daughter.

9. “You know how those doctors are. They don’t know their right from their left.” — on modern medicine.

10. “IF YOU EVER TOUCH HER AGAIN, I’LL RIP YOUR FUCKING FACE OFF. NOW GET OUTTA HERE BEFORE I HAVE A HEART ATTACK TRYING TO KILL YA.” — to a man who tries aggressively to dance with his daughter at a dive bar.

11. Would you mind gettin’ your beak out of that Blackberry!?” — yet again, to his workaholic daughter.

And now, check out the fun theatrical trailer:

Trouble with the Curve gets a wide release on Friday, September 21. The film is rated PG-13 for language, sexual references, some thematic material, smoking, and Clint Eastwood being all that is man. Click here for local showtimes and tickets.