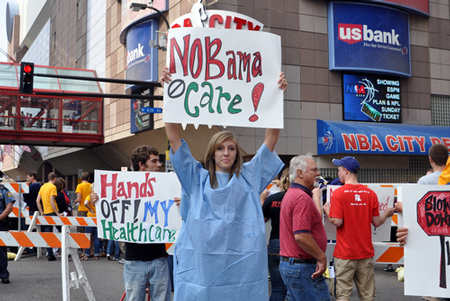 Attendees at this year’s Values Voter Summit, the annual DC conference sponsored by the evangelical Family Research Council, have been among the most fervent opponents of President Obama’s health care reform law. Some of the groups currently suing the Department of Health and Human Services over the law’s requirement that health insurers cover contraception are on hand as exhibitors and panel discussion members. But even here, many attendees I interviewed Friday had to admit that now that the law had survived the Supreme Court and was starting to take effect, there were parts of Obamacare they not only liked, but which had already helped family members or people they knew.

Wes Cantrell, visiting from Atlanta, is no fan of Obamacare. He thinks it should mostly be repealed. Except for the part that’s allowing his his grandson to stay on his parents’ insurance plan while he’s in college. “That’s good,” he concedes. Cantrell also admits that the ban on denying coverage to people with preexisting conditions ought to be spared. I didn’t get a chance to explain that keeping the bit about preexisting conditions would be impossible without the individual mandate (the law’s requirement that people buy health insurance or pay a fine), which will force lots of young healthy people into the system to subsidize the sicker people.

Another attendee, a doctor from Maryland who refused to give his name, told me that he had a sibling who got care for a very serious illness thanks to the new law. “That’s a positive thing,” he admitted. Even so, like many people I spoke with, for the doctor, the benefits still didn’t outweigh what they see as the law’s primary flaw: the mandatory contraception coverage. “I object to the burden imposed on institutions to provide contraception for free,” the doctor said.

In the hotel hallway, I ran into a group of recent college graduates interning for the Family Research Council and asked them whether any of them were still on their parents’ insurance plans. The horrified looks on their faces suggested that except for the British guy, every single one of them was getting insurance from their folks—the major benefit so far of Obamacare, which allows young people to stay on their parents’ plans until the age of 26. They refused to talk about it and tried to pawn me off on some high school kids coming down the stairs.

What was perhaps most remarkable about the impact of Obamacare on its most fervent opponents was how little impact it had had on them. The most controversial part of the law, the individual mandate and the requirements for businesses to provide coverage, haven’t kicked in yet, so it’s still too early to say. But I didn’t talk to a single person at the summit who had been enslaved by the law, as opponents so often claimed would be the result. Most wouldn’t even be affected by the mandate or the business requirement. Obviously it’s not a very scientific sample. Values Voters skew old; they don’t need birth control. Many of the people I spoke with were already getting their health care from the government, including some young people from Liberty University who had military health coverage. (One guy from Liberty U. I spoke with was convinced that Obamacare was taking money out of his paycheck every month, until informed by a colleague that those withholdings were for Medicare.)

But for all of the angry freakouts by conservatives who have claimed that Obamacare was going to be the end of the world as they knew it and the triumph of socialism over freedom, not a single person I spoke with could offer up concrete evidence that Obamacare was now or would ever be ruining their lives. Bruce Jones, from Liverpool, NY, who is retired from the military and thus gets generous health benefits from the government, conceded that it might be hard for people to point to anything specific about the law that might be hurting them. The opposition, he says, “it’s more ideological now than anything real.”