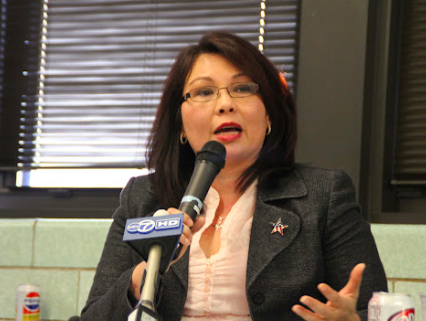 Four years ago, the Republican party was celebrating the military service and foreign policy credentials of its presidential nominee, Arizona Sen. John McCain. But last week in Tampa, the United States’ overseas excursions were that which must not be named. Mitt Romney made no mention of Iraq or Afghanistan, and with the exception of an appearance on stage by a group of disabled veterans, there was virtually no mention of the hundreds and thousands of veterans of post-9/11 conflicts. That has Illinois House candidate Tammy Duckworth (D) fired up.

Also read: Nobody puts Tammy Duckworth in a corner.

“This is about a party that wants to lead this country, and Mitt Romney who wants to be the commander in chief and yet he couldn’t even remember to talk about military men or women or our veterans,” said the Iraq War veteran—and double amputee—in an interview with Mother Jones on Wednesday. “And this is the same guy who during the Republican presidential primaries called for an invasion of Iran. So it’s very typical to sit there and say you’re gonna use military forces, but then you don’t actually acknowledge the men and women who have to bleed for this nation? The least he could have done is talk about Afghanistan and the work that needs to be done. He could have at least confirmed the covenant that we have to keep with our veterans, and he didn’t do any of that.”

“They say they support our veterans, and yet I don’t see the actions that back up what they’re saying,” she added. “Instead they talk about everything else and we have men and women dying right now.”

Duckworth, who narrowly lost her first House bid in 2006, has reason to be on edge: Her Republican opponent, tea party Rep. Joe Walsh, recently criticized her for discussing her military service on the stump, charging that a “true hero” wouldn’t need to talk up her record.