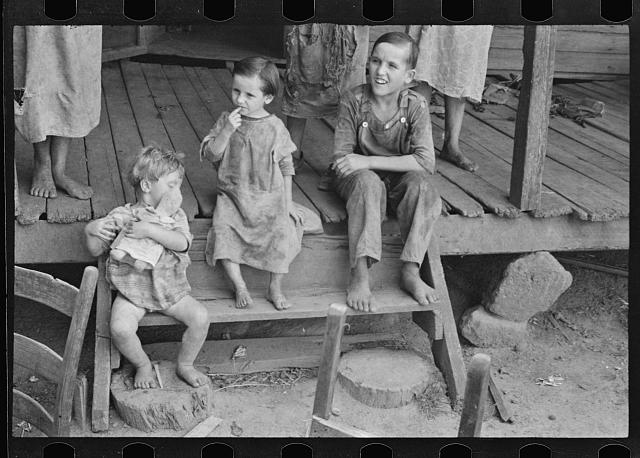 As Mitt Romney and Barack Obama have spent the past few months tangling over whether the administration is trying to change the welfare program to give poor, unemployed single moms money for nothing, they’ve missed a troubling new development about the future of the US safety net. Over the past few months, the state of Alabama has been seriously considering dropping out of the federal public assistance program altogether.

Today Alabama voters go to the polls to decide whether or not to approve an amendment to the state’s constitution that would allow shifting $437 million from the state’s gas and oil drilling royalty trust to the state’s general fund to cover a $150 million budget deficit. Alabama suggested earlier this year that if the measure is defeated it may become the first state in the country to simply quit the Temporary Assistance for Needy Families (TANF) welfare program, a move that could push more than 40,000 children in the state even deeper into poverty.

Such a move would have been unthinkable before 1996, when President Clinton signed a welfare reform bill passed by a Republican controlled Congress. Before that, welfare was a federal entitlement program whose budget grew according to need. But the 1996 reforms turned the program into a block grant which gave states a fixed amount of federal money every year, no matter how bad the economy got or how many people were in dire straits. Under the 1996 law, states were also required to spend a certain amount of their own money to receive federal funds.

Under the block grant, states could also choose not to contribute, and thereby forgo any federal cash. There are consequences to such a decision: If Alabama stops paying its share of TANF, it would lose $93 million a year in federal cash—money that Congress has allowed states to spend on things that have nothing to do with keeping kids out of poverty. Last year, for instance, only 27 percent of Alabama’s TANF program funds were even spent on direct cash assistance to families. In Alabama, TANF benefits are really hard to get. A family of three won’t qualify if the parent earned more than $3,200 in annual income; that’s five times below the federal poverty line. And the average payment is only $189 a month. That amount could be higher, but Alabama diverts almost a quarter of its TANF grant to other projects, like child abuse and neglect programs—initiatives that the state would have to pay for itself if it lost its federal block grant funds.

The fact that bolting from TANF has even been part of the budget debate in Alabama suggests a new willingness by cash-strapped states to simply give up on their obligations to the poor rather than raise taxes.

Chris Sanders, a policy analyst at the Arise Citizens’ Public Policy Project in Alabama, says the potential implications of killing off TANF go beyond that that program. He points to Medicaid, which is similar to TANF in that the state has to pay out millions of dollars in order to receive the federal matching funds that help to keep the program afloat. If Alabama can pull out of TANF, Sanders says, it could also pull out of Medicaid, a move that would leave 1 million state residents without health care. “We’re essentially at the bare bones,” he says. “There’s the question of where else do you go to cut?”

Congress has helped speed up this new race to the bottom. Last year, it allowed something called TANF supplemental grants to expire. These were extra grants given to low-spending states like Alabama that had much higher rates of poverty than most states. When Congress let the grants expire, Alabama lost $11 million from its program, at the same time federal stimulus money, which bolstered cash assistance through TANF, dried up. The cuts have left Alabama in a very bad place indeed.

In an email, a spokesman for the Alabama Department of Human Resources insists that the state “plans to operate a TANF program in FY 2013 regardless of the results of the September 18th Constitutional Amendment.” But that doesn’t mean poor kids in Alabama will necessarily be spared if voters reject the amendment. He says, “If the amendment is rejected, cuts will most likely occur in our child care subsidy program and child protective services.” Even so, local leaders seem skeptical that the state can fix its budget hole without pretty dire moves like killing TANF. The state’s senate minority leader Roger Bedford (D) told the Tuscaloosa News this week: “If the amendment fails, the governor has said that there is not a Plan B, and we will have no other option but to slash and burn the state budget.”

Given how much is at stake in Tuesday’s election, Sanders says that it’s been a remarkably low-key affair, with little or no TV advertising. There’s nothing else on the ballot to draw people to the polls. And, he says, the forecast calls for rain. “A lot of it is going to depend on the turnout,” he says.

State Rep. Merika Coleman (D), a member of the budget committee, was involved discussions earlier this year about the cuts the state would have to make should the amendment fail. She’s not sanguine about the outcome of the vote. She says tea party activists have been pushing back and putting pressure on legislators to oppose the amendment, even though many of them initially were supporters. “They don’t get that that there are people behind those line items,” she laments. Of the tea partiers, she says, “There is this faction of people who truly believe there is money we’re hiding. They believe we just literally have it, and that these are just scare tactics we’re using [to pass the amendment], and that it won’t really be that bad [if it fails]. If this vote doesn’t pass,” she says, “it’s going to be really scary to me.”