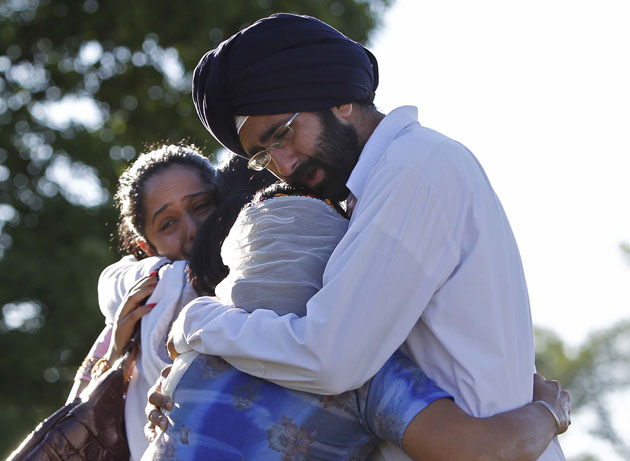 About 30 people were inside the Sikh Temple of Wisconsin in Oak Creek, Wisconsin, a suburb just south of Milwaukee, at 11:30 a.m. Sunday when gunfire broke out and at least seven people were killed, including alleged gunman Wade Michael Page who reportedly exchanged fire with a police officer. According to police, the gunman was killed and the officer was shot, wounding him critically. At least two other people were also injured.

President Obama, Wisconsin Gov. Scott Walker (statement), and the Indian Embassy in Washington, DC, have been briefed on the situation.

Here’s CNN‘s initial report of the shooting that took place at the Sikh gurdwara:

Here’s what you need to know:

Who was the shooter?

Authorities have identified the alleged gunman as Wade Michael Page. Sources say that Page had once served in the U.S. military, according to CBS News. Police officials have described the suspect as a stocky, 40-something Caucasian male with multiple tattoos. Unspecified evidence suggests ethnicity or race may have motivated the shooting; however, police have not identified any links to extremist groups. 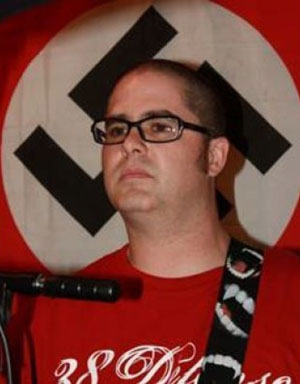 An unnamed US defense official says that Page is a 40-year-old Army veteran who was honorably discharged in 1998 after six years of service, Bloomberg reports. Page served as a Hawk missile repairman and a “psychological operations specialist.” The LA Times reports that Page’s discharge was not honorable, but a lower administrative level, and that he was reduced in rank from sergeant to specialist before leaving the Army—both moves that may reflect a conduct problem at the end of his service.

More on Page’s racist tattoos, and the chilling interview he gave in 2010.

The Southern Poverty Law Center has identified Page as “a frustrated neo-Nazi who had been the leader of a racist white-power band.” (The frontman of the band End Apathy, named Wade, gave this interview to the white supremacist website Label 56 in 2010.) SPLC also claim to have been tracking Page ever since he tried to buy goods from the neo-Nazi National Alliance in 2000. The National Alliance was led by Dr. William Luther Pierce, the author of the infamous 1978 novel The Turner Diaries. Pierce, who died in 2002, is considered one of the ideological godfathers of the modern American white nationalist movement. Pierce promoted white power music ventures, racist video games, weekly radio addresses, and online forums to advance his organization’s cause.

So far there is no confirmation of the attacker’s motive. Early reports describe the gunman as a bald white male in his 30s. And still others quoted unnamed law-enforcement sources saying the shooter was a vet with white supremacist leanings. However, as of 9:30 p.m. PST on Sunday, August 5, nothing definitive had been reported. And the FBI, which is leading the criminal investigation, released a statment saying: “While the FBI is investigating whether this matter might be an act of domestic terrorism, no motive has been determined at this time.” At a press conference with reporters Monday, FBI special agent Teresa Carlson reiterated that while the Bureau was investigating the incident as a potential act of domestic terrorism, “motive is still being assessed at this time.”

On Sunday, police had cordoned off and evacuated a neighborhood in Cudahy, Wisconsin, as they searched a home there. Bomb experts as well as Bureau of Alcohol, Tobacco, and Firearms agents were reportedly on the scene.

While there were multiple eyewitness accounts of multiple gunmen, police have stated that they believe there was only one perpetrator on the scene. At a press conference Monday, authorities indicated they were looking for a “person of interest” (not a suspect) who was spotted near the temple, though they have said that there is no evidence yet that the shooter did not act alone. Here’s a screenshot of FBI special agent Carlson holding up the photograph of the “person of interest.” 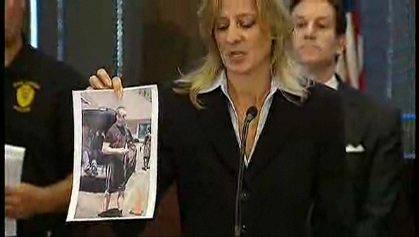 What weapon was used?

Police officials said the shooter used a 9mm semi-automatic pistol. (They are attempting to track the origin of the firearm.)  A law enforcement official told CNN that Page owned the weapon legally.

CNN had previously reported police sources as saying that two semi-automatic handguns were found on the scene. Oak Creek Police Chief John Edwards said during a press conference Wednesday that the officer who was shot by the attacker was hit “eight to nine times,” but was in stable condition at the hospital.

On Monday, White House press secretary Jay Carney told reporters that President Obama “does support renewing the assault weapons ban” that between 1994-2004 prohibited the manufacturing of semi-automatic arms for civilian use. Carney added, however, that “there has been reluctance by Congress to pass that renewal.” (The Obama administration has shown very little action on matters of tighter gun control.) Carney’s comment came one day after the mass shooting at the Sikh temple, and just 16 days after the Dark Knight Rises theater shooting in Aurora, Colorado that left a dozen people dead and nearly 60 wounded.

Sikhism is the world’s fifth largest organized religion, with a global population of roughly 30 million. There are approximately 250,000 Sikhs in the United States. Following the 9/11 attacks, Sikhs mistaken for Muslims were targets of harassment and hate crimes. Here’s a report from Democracy Now! from September 2011:

Here is the statement from Greenfield police chief Brad Wentlandt issued shortly after the news broke:

About 10:25 am, police dispatch received multiple 9/11 calls for a shooting. 20-year law enforcement veteran was the first person on the scene. He engaged an active shooter outside the temple. Multiple rounds were exchanged, officer was shot multiple times. He is in surgery, condition unknown. The shooter was also shot. He is down on the scene and presumed deceased. Tactical officers have made multiple runs through the facility. The best information we have now. Two individuals were transported from the scene for gunshot wounds. One being the officer, one being a civilian. The tactical personnel have additional identified 4 deceased inside of the temple and three deceased outside the temple, one of whom is the shooter.

A MoJo investigation: At least 58 mass shootings in the US in 30 years. Plus: A survivor speaks out.

Here is a press release from the Embassy of India in Washington, DC:

We have seen reports on the tragic incident earlier today of firing at a group of worshippers in a Gurudwara in the Milwaukee suburb of Oak Creek, Wisconsin. The Embassy is seized of the situation and has been in touch with the National Security Council in Washington, D.C. Our Consulate General in Chicago too has been in close touch with the local authorities to monitor the situation. An official has been deputed to visit the site to ascertain the situation on the spot.

Obama, Romney, and Haley weigh in:

South Carolina Gov. Nikki Haley, whose parents are Sikh immigrants from Punjab, India, released a statement. Via her Facebook page: “It’s very sad to see something like this happen to a peaceful place of worship. Our prayers and condolences go out to the families of the innocent victims and the family of the heroic officer in this senseless tragedy.”

From Obama’s statement: “My administration will provide whatever support is necessary to the officials who are responding to this tragic shooting and moving forward with an investigation. As we mourn this loss which took place at a house of worship, we are reminded how much our country has been enriched by Sikhs, who are a part of our broader American family.”

From Mitt Romney’s statement: “This was a senseless act of violence and a tragedy that should never befall any house of worship. Our hearts are with the victims, their families, and the entire Oak Creek Sikh community. We join Americans everywhere in mourning those who lost their lives and in prayer for healing in the difficult days ahead.”

Have there been any changes in Wisconsin gun laws recently?

Yes. Almost exactly a year ago, Walker signed the Personal Protection Act (PDF), a law that for the first time allowed Wisconsinites to carry a concealed gun with a license. If, as initially reported by NBC, the suspect was an Army veteran with an honorable discharge and no felony convictions, he could have gotten a permit summarily. But as noted above, military sources say Page’s discharge was not honorable.

But he wouldn’t have needed one, because Wisconsin has long permitted anyone to carry guns openly on their person without a license. And thanks to last year’s PPA law, police are specifically barred from using “disorderly conduct or disturbing the peace statutes as a means of effectively prohibiting the open-carrying of lawfully-possessed firearms,” according to the National Rifle Association, which lobbied hard for the relaxation in Wisconsin gun-carry laws. In fact, during this spring’s gubernatorial recall election, the NRA campaigned for Scott Walker on the grounds that his Democratic opponent might roll back the new law:

And at least one forum for open-carry gunners in Wisconsin also encourages their brothers-in-arms to be noncooperative with law enforcement officers.

How often do these mass shootings happen and what do they have in common?:

Too often. Here’s our interactive map and guide to the last 30 years of mass shootings. This is the 57th by our count.

WISN, the ABC affiliate in Milwaukee, has a good live stream and blog here. And the Milwaukee Journal Sentinel also has good comprehensive reporting and on-the-scene updates here.