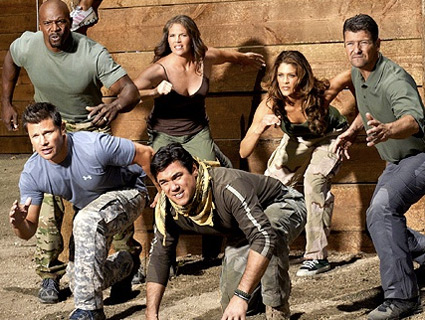 Remember that night you drank too much Drambuie and then had a dream in which Wesley Clark, Picabo Street, Todd Palin, Superman, a WWE Diva Champion, and Nick Lachey were all shooting bazookas and other loud weaponry at inanimate objects in the desert?

Well, mega-producers Dick Wolf and Mark Burnett read your mind, stole your idea, and made a summer reality show out of it for NBC.

Stars Earn Stripes (premiering Monday at 8 p.m. EDT—with a two hour season opener) pairs each C-list celeb with a military or law enforcement tough guy. Together, they simulate wartime scenarios, all of which look like deleted scenes from Joel Schumacher movies. Every time Dean Cain or Todd Palin make something go boom, they raise money for their partner’s charity.

All of this is conducted under the watchful eyes of hosts Samantha Harris and ex-Army general/ex-presidential candidate/ex-non-reality-show-personality Wesley Clark (just for a frame of reference, the guy used to save the lives of Kosovars).

Yes, the show means well. Nick Lachey and co. gush endlessly about how lionhearted our men and women in uniform are. The episodes are set to music that somehow manages to sound even more glowingly patriotic than the score to Air Force One. Things detonate violently.

Here’s a TV spot, in case you need any more convincing one way or the other: