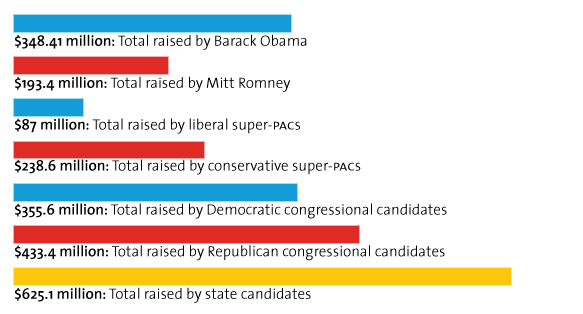 “He’s not going to get grassroots support from individuals; I don’t think he’ll get organized support by the party or 501(c)(4)s and I don’t know how you survive without that kind of support.”
—Republican operative Bradley Blakeman, expressing skepticism about Rep. Todd Akin’s (R-Mo.) chances at unseating Democratic Sen. Claire McCaskill after his comment that victims of “legitimate rape” aren’t likely to become pregnant. Groups including Karl Rove’s dark-money Crossroads GPS have pulled their ads from the race (for now).

7 percent: The amount of television stations’ revenues that may come from political ads, thanks to super-PACs and nonprofit groups, according to Moody’s. TV stations are required to give discounted rates to campaigns, but those rules don’t apply for outside spending groups. “It’s like Christmas in September for broadcasters. And October,” David Keating, head of the pro-Citizens United group Center for Competitive Politics, told Politico.

Between 2011 and this July, conservative super-PACs have spent $137.1 million, four times the $33.1 million spent by their liberal counterparts. The Center for Responsive Politics charted this year’s numbers:

• An exhaustive account of how nonprofits claiming to be social welfare groups are pouring millions of dollars into the 2012 election. ProPublica
• No one seems to be taking the rule banning campaigns from coordinating with outside spending groups too seriously. Politico
• While his brothers were off playing the dark-money game, Bill Koch built himself a private Old West town. Denver Post