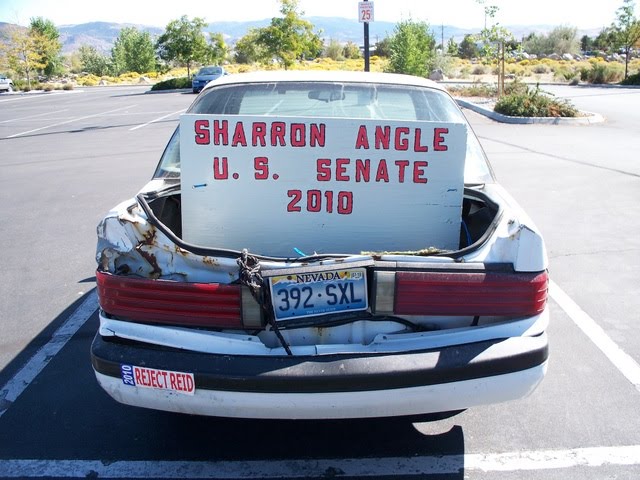 Back in the heady tea party days of 2010, it seemed even a wet noodle could have beaten Sen. Harry Reid (D-Nev.), the beleaguered Senate majority leader and perennial butt of conservative jokes. But then the Republican Party nominated Sharron Angle, a maverick “Oath Keeper wanna-be” and anti-fluoride activist who stood up for BP, called unemployed Americans “spoiled,” and railed against “an unscientific hysteria over the man-caused global warming hoax.” Fox News laughed at her, she lost the race, and it seemed the GOP had finally found a heap of crazy that even they couldn’t carry.

But she’s back, baby. Ducking into a ladies’ room at the Republican convention in Tampa Wednesday, Las Vegas Sun reporter Karoun Demirjian ran headlong into a chipper Angle, who exulted in the party’s continuing embrace of her brand of crazy wisdom. Demirjian reports:

She mentioned specifically the push to audit the Fed, a rallying cry for the pro-Paul camp that they managed to get on the Republican platform last week. Angle had called for it in her 2010 campaign.

Beyond that, the new GOP platform also calls for the United States to study a return to the gold standard, and Angle has long advocated “making a basket of commodities (metals, oil, etc.) as a basis for maintaining the value of the U.S. currency”—call it the “gold, pork bellies, and frozen concentrated orange juice standard.”

Angle—a longtime Ron Paul sympathizer—supported Rick Santorum in the primaries and is a lukewarm Romney backer now, according to Demirjian. She was joined in the bathroom by two organizers of a group called Tea Party and Republicans Uniting Nevada Conservatives, and at this convention, it seems they’re realizing their dream of one party, under Sharron. Said one of the organizers: “She was ahead of her time.”