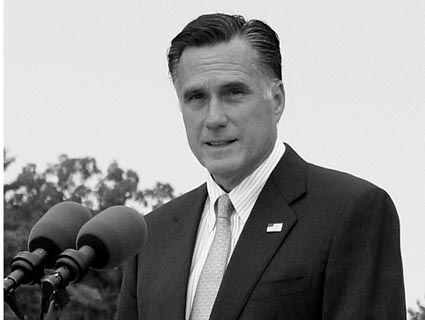 Next time, Mitt Romney should cite books by dead authors so they can’t publicly rebuke him for misinterpreting their books.

At a fundraiser in Israel, Romney reportedly told a group of donors that economic differences between Palestinians and Israelis are entirely the result of “culture,” ignoring external factors like the economic impact of the 45-year Israeli occupation of the West Bank. Romney initially claimed he didn’t say that at all, despite making a similar argument in his 2010 book, before rehashing the same simplistic argument over at National Review. Romney cited two books in support of his argument, Guns Germs and Steel by Jared Diamond, and The Wealth and Poverty of Nations by David Landes*.

In the New York Times, Guns, Germs and Steel author Jared Diamond expresses confusion, writing that Romney’s take on his book was “so different from what my book actually says that I have to doubt whether Mr. Romney read it.”

It is not true that my book Guns, Germs and Steel, as Mr. Romney described it in a speech in Jerusalem, ‘basically says the physical characteristics of the land account for the differences in the success of the people that live there. There is iron ore on the land and so forth.’ That is so different from what my book actually says that I have to doubt whether Mr. Romney read it. My focus was mostly on biological features, like plant and animal species, and among physical characteristics, the ones I mentioned were continents’ sizes and shapes and relative isolation. I said nothing about iron ore, which is so widespread that its distribution has had little effect on the different successes of different peoples.”

Diamond also argues Romney has Landes wrong, writing that Landes “would find Mr. Romney’s statement that “culture makes all the difference” dangerously out of date,” because Landes “analyzed multiple factors (including climate) in explaining why the industrial revolution first occurred in Europe and not elsewhere.”

This also isn’t the first time Romney has found himself in the awkward position of being told by the author of a book he cited that he has it all wrong. In June, Romney kept citing Noam Scheiber’s book The Escape Artists to argue that “Obamacare would slow down the economic recovery in this country and they knew that before they passed it.” Writing at the New Republic, Schreiber explained that his book doesn’t actually say that.

New York‘s Jonathan Chait thinks Romney is simply a very bad book reviewer. Perhaps, but Romney also seems to have formed an entire ideological worldview based on misinterpretation of books he’s read. Romney can probably avoid embarrassment by citing dead authors who won’t be able to contest his mangling of their ideas, but the larger problem is the erroneous conclusions he draws based on what he thinks he’s read, conclusions that will influence his policy choices should he ever become president.

Correction: An earlier version of this post incorrectly state Romney cited Why Nations Fail, by Daron Acemoglu and James Robinson. In fact it was The Wealth and Poverty of Nations by David Landes.