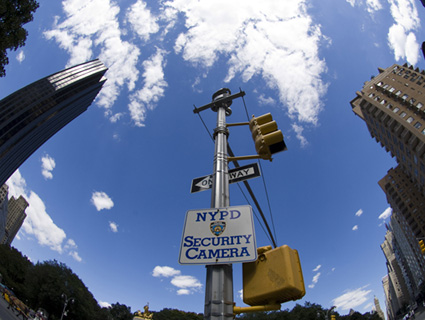 Muslims talking about anti-Muslim discrimination is proof the New York Police Department should spy on Muslims—at least according to the NYPD.

The NYPD official in charge of the department’s massive surveillance of local Muslims told a court in June that two conversations in Urdu overheard by his unit prove the worth of the spying program—a program that, as the Associated Press first reported on Tuesday, never led to a single lead, arrest, or investigation. Now Mother Jones has discovered that the two conversations the NYPD official cited as evidence of the value of the surveillance program include complaints about discrimination against Muslims. The NYPD asked the court reviewing its spying activities to redact the conversations from the official transcript, but an error in the redaction process allowed Mother Jones to identify parts of the text.

The improperly redacted conversations cited by the NYPD official, associate police chief Thomas Galati, in fact consist of Muslims discussing discrimination against Muslims after 9/11. The conversations contain no evidence of terrorist ties. In one of the redacted conversations, an Urdu-speaking man says, “This is unbelievable, that New Jersey Transit Worker who got fired for burning the Holy Quran by Ground Zero was rehired last week.”

When asked by civil rights attorney Jethro Eisenstein, who is part of a long-running lawsuit against the NYPD over its spying activities, why that conversation would be recorded, Galati responded, “That conversation is indicating that these males who speak Urdu is valuable to us in detecting or preventing a terrorist activity.”

The second conversation involves two men apparently discussing a recent profiling case in Memphis, in which two imams were prevented from boarding a flight because they were wearing religious clothing.

“This goes to show us that the US killed Osama Bin Laden, but Osama’s fear and terror is still very much there,” one man said, according to the redacted portion of the transcript. “The hate that is developed since 911 against Muslims makes me sick to my stomach.”

“I think the Americans are brainless,” the other replied. “If a terrorist wants to do something, he or she would not wear religious attire.” (The man’s right: The 9/11 hijackers were not wearing religious clothing.)

Eisenstein pressed Galati on how this information was relevant to terrorism. “I have to state that in these conversations, when they indicate signals to us that we can use as far as identifying people from countries of concern, it is of value,” Galati said.

Eisenstein told Mother Jones that the errors in the redaction process were unintentional, and that he had personally blacked out the text before uploading it. “The redactions were at the request of the police department,” Eisenstein said. “I attempted to comply with our agreement that certain things were to be redacted and obviously I didn’t succeed in doing that.”

Referring to Muslims as “Islamics” throughout his testimony, Galati argued that the surveillance program was justified because, after the 9/11 attacks, “we needed to know where people lived from countries of concern that could either recruit, hide or secrete [sic] themselves.” As the Associated Press report noted, Galati argued that people from South Lebanon might be Hezbollah sympathizers, and that the presence of Urdu speakers might indicate the “kind of place that a terrorist would be comfortable in.”

Muslim groups have pointed to Galati’s testimony as proof the entire spying initiative was useless. “The only thing more absurd than the officers’ surveillance notes are the flimsy justifications the NYPD has offered for spying on these regular Americans who were just trying to live their daily lives,” said Glenn Katon, legal director for Muslim Advocates, a Muslim civil liberties group.

There have been terrorist plots targeting New York City since 2006, but as Justin Elliott of ProPublica reported, the NYPD has overstated its role in preventing several. Galati’s “Demographics Unit,” based on his testimony, can lay claim to stopping exactly none.

“We’ve been having a discussion in this country since 9/11 about profiling, and study after study has shown it is simply ineffective to profile based on religion and ethnicity,” says Michael Price, an attorney with the Brennan Center’s Liberty and National Security Program. “It might be time to give investigating based on evidence a try because investigating based on race, ethnicity, or national origin clearly isn’t working.”

Despite Galati’s testimony stating that information from the NYPD’s Demographics Unit didn’t lead to any foiled plots, it wasn’t necessarily a total waste. Asked by Eisenstein why police officers returned several times to a particular location, Galati replied that sometimes they just liked the food. “Sometimes these officers, when they go, they go to places that they may like the food and go back for that reason, and I know that that has happened,” Galati said. “So multiple visits might indicate such an event.”

According to the testimony, they were able to charge those meals as work expenses.