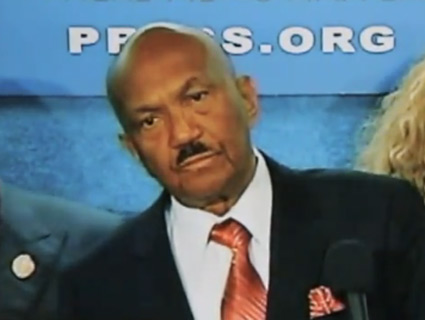 In late July, Rev. William Owens, head of the Coalition of African-American Pastors, appeared at the National Press Club to denounce President Barack Obama’s support for same-sex marriage, which he claimed enabled child molestation. “If you watch the men who have been caught having sex with little boys, you will note that all of them will say that I was molested as a child,” he declared. “For the president to condone this type of thing…is irresponsible.” Owens, who touts his role as a civil rights leader in Nashville, Tennessee during the late 1950s and early 1960s, also rejected the idea that gay rights count as civil rights. “I didn’t march one inch, one foot, one yard, for a man to marry a man, and a woman to marry a woman.”

Owens’ remarks have garnered lots of press attention as a sign that President Obama’s stance on same-sex marriage might alienate black voters. Owens portrayed himself in an interview as a disaffected Obama supporter and complained that the president “has not responded to the African-American communities as much as other” constituencies. But a closer look at Owens’ background suggests he’s not much of a bellwether—and raises questions about whether the Tennessee pastor is indeed the civil rights leader he claims to be.

NOM documents state that the group has sought to “drive a wedge between gays and blacks” by using “African American spokespeople for marriage.”

Owens has a long history of ties to Republican figures and causes, and he currently moonlights as the National Organization for Marriage’s liaison to black churches. Cropping up with frequency in recent months to blast Obama, along the with NAACP, for supporting gay marriage, Owens—along with Maryland pastor Harry Jackson—is a key part of NOM’s strategy of using African American figures to dispute the notion that the marriage equality movement is a civil rights cause.

Owens acknowledges that his Coalition of African-American Pastors—which he says has a membership of 3,000—receives a modest amount of funding from NOM. Founded in 2004, the group went dark in 2008 after facing “administrative dissolution” for failing to file its annual report. The coalition was revived in late July, a few days after Owens staged an anti-gay marriage protest outside the NAACP’s annual convention and just before he made his appearance at the Press Club. The group is currently circulating a petition that calls on President Obama “to repudiate his assertion that gay marriage is a civil right.”

Though Owens claims to have initially supported Obama, his political activism over the years has centered almost exclusively on conservative issues and candidates. In 2004, he joined the executive committee of the Arlington Group, an anti-gay rights organization founded by religious right activists, including Paul Weyrich and the American Family Association. That year Owens participated in rallies supporting a federal amendment defining marriage as between a man and a woman. In 2005, Owens rallied alongside then-Senate Majority Leader Bill Frist (R-Tenn.) in support of George W. Bush’s judicial nominees, and the following year he was active in a group called “African-Americans for Alito.” Owens attempted to capitalize on his conservative connections in 2006 by starting a seemingly short-lived consulting firm, William Owens & Associates. “Conservatives need support in the black community now more than ever,” he told the Tennessee Tribune at the time. In 2008, he endorsed Mike Huckabee’s presidential bid, telling the Associated Press that the former Arkansas governor “has actually done what he talks about when it comes to the African American community, rather than just pandering.”

Owens’ background makes him an ideal ally for NOM. Internal documents disclosed in March as part of a campaign finance investigation in Maine show that the group sought to “drive a wedge between gays and blacks—two key Democratic constituencies”—by using “African American spokespeople for marriage.” The group, the documents state, wanted to “develop a media campaign around their objections to gay marriage as a civil right; provoke the gay marriage base into responding by denouncing these spokesmen and women as bigots.”

Surviving leaders of the Nashville civil rights movement, who spoke with Mother Jones, have no recollection of Owens.

With his backstory as an activist at the center of the fight for civil rights, Owens would seem to be the perfect messenger. “I was a leader in the civil rights movement in Nashville from 1958 to ’59 and 1960,” Owens told Mother Jones. “We organized from dorm to dorm, from school to school, and went around training students how to sit in, and how to be an activist, what to do.” Nashville’s sit-ins played a particularly important role in the civil rights struggle, pioneering non-violent tactics that were adopted by the broader movement.

But surviving leaders of the Nashville civil rights movement, who spoke with Mother Jones, have no recollection of Owens.

Rev. C.T. Vivian, an ally of Martin Luther King Jr. who helped organize the Nashville sit-ins and who is now president of the Southern Christian Leadership Conference, said he did not recall crossing paths with Owens. Rev. James Lawson, the famed practitioner of non-violence who trained the sit-in activists, did not remember Owens either. The same goes for Rep. John Lewis (D-Ga.), one of the major student leaders in the Nashville sit-in movement who went on to lead the Student Nonviolent Coordinating Committee.

The men who helped awaken the conscience of a nation expressed disappointment at the idea that Owens’ experience of segregation could lead to a career of anti-gay rights advocacy and a role with an organization that is trying to use the memory of the civil rights struggle itself to sow division between African Americans and gay rights supporters. “William Owens is operating outside of the transparency and the openness of Martin Luther King Jr. or Rosa Parks,” Lawson says. “If he was in Nashville during part of the time I was there, he was not paying attention to my teachings. My teachings were not about practicing social or cultural discrimination against anybody.”

Correction: This article originally reported that the only evidence Mother Jones could find of Owens’ involvement in the Nashville civil rights movement was an oral history interview conducted with Owens in 2004 by the Nashville Public Library. We contacted the library multiple times to confirm details of the interview, which had not been digitized, and then emailed Owens for his response on the contents of this interview. This request went unanswered, as did numerous other messages seeking comment on various aspects of his civil rights movement past. On August 31, the Nashville Public Library contacted Mother Jones and said that the William Owens whom they interviewed was not the same person depicted in this article. Mother Jones regrets the error.