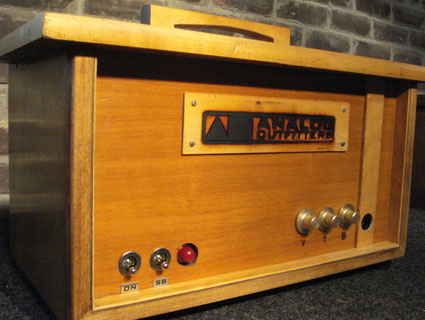 Ben Juday usually repairs electric organs, but these days, he’s breaking them apart. The owner of Analog Outfitters in Illinois takes the guts out of old, unwanted organs and recycles them as guitar amps now sold by dealers across the country.

About a year ago, he noticed that organs beyond repair were just getting chucked. “People burn them, regularly. Electronics and everything,” he lamented. So he began tinkering with an abandoned organ, just to see that what he could do, and turned it into a pretty darn good sounding guitar amp. Soon, his recycled amps were being plugged into the instruments of touring musicians such as Kevin Post, the guitarist for country star Blake Shelton.

“It’s like if you take a car, and you keep the body and transmission. Everything else you replace,” he says about his process. The electronic equipment—including the vacuum tubes, metal wiring, and transformer—are the amp’s functional backbone. Wood from the organ is also recut to make the body of the amp. “It’s like a puzzle,” he says, “It’s like playing with Legos when you’re kid.”

Juday picked up his technical skills on the wayside—in the middle of a geography PhD. A physics professor introduced him to vacuum tubes, the old school glass and metal tubes that used to control electric currents in everything from CRT screens to room-sized computers to, yes, electric organs. While vacuum tubes are pretty much obsolete now, their most important modern use is in high-end guitar amps. Amps made with semiconductors are cheaper and lighter, but their sound just doesn’t have the color and richness of a tube amp. Juday still consults with his old mentor, whom he calls his “secret weapon.”

Resurrected technology is one part of the recycled amp’s sentimental allure, but it’s about the music too. A good number of the instruments that come Juday’s way are Hammond B3 electric organs, which have a long tradition connecting music from gospel to Radiohead. (Listen for the B3 in Radiohead’s “Fake Plastic Trees.”) They were also once a popular household instrument before falling out of fashion and ending up abandoned on sidewalks. With these guitar amps, the organ’s musical legacy ends up on stage rather than in the trash.

The organs Juday both repairs and deconstructs come with their own varied backstories. He recalls one that had formerly been used in a family carnival act and another in a family polka band. Chicago band Wilco went on an international tour with a refurbished organ from a 90-year-old woman. Connecting history to modern music is part of Analog Outfitters’ appeal: vintage organs and old school vacuum tube technology—they’re all getting a new voice.