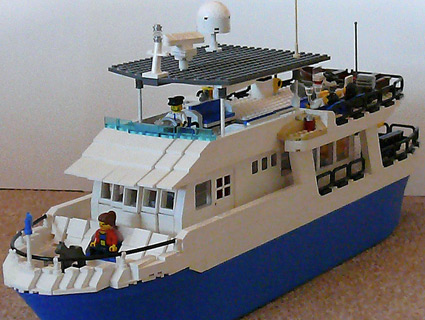 On Wednesday morning, ABC News ran a story on one of the “Romney party yachts,” a 150-foot yacht hosting an exclusive event in Florida for donors who raised more than a million bucks for the Romney campaign. The article (video report and all) highlights the irony that the yacht flies under the flag of the Cayman Islands.

But that’s not even the funniest or most tone-deaf thing about the boat. Check it:

The exclusive event, hosted by a Florida developer on his yacht “Cracker Bay,” was one of a dozen exclusive events meant to nurture those who have raised more than $1 million for Romney’s bid…The Cracker Bay is owned by Gary Morse, developer of the Villages retirement community…Registered in the Caymans, the Cracker Bay has an impressive art collection and can seat 30 for dinner.

Yes, you read all that correctly: Team Romney threw a party at the St. Petersburg Municipal Marina, where extraordinarily rich people fraternized aboard a boat called “Cracker Bay.”

If you need a refresher on exactly why this is odd, click here now.

For the record, the colloquial term “Florida cracker” refers to the colonial English settlers of what is now the Sunshine State, as well as their descendants. The Democratic 41st governor of Florida, “Walkin'” Lawton Chiles (a now-deceased buddy of the Clintons), famously quipped about winning the “cracker vote“—meaning down-home white voters. Chiles also praised Bill Clinton’s ability to fluently “speak cracker.”

Cracker Bay is also the name of a road in South Africa.

So there you go.