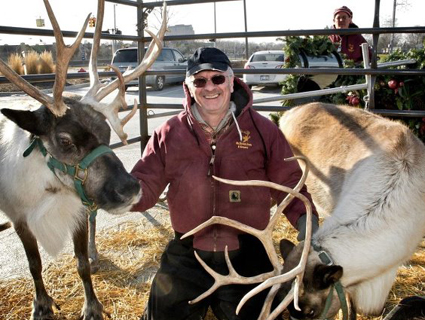 Update, 8/7/12, 11:24 p.m.: Leading Nancy Cassis by 30 points with 72 percent of the precincts reporting, Kerry Bentivolio has claimed victory in the GOP primary. He’ll take on Democratic nominee Syed Taj in November. All told, Liberty for All spent more than $500,000 in support of Bentivolio. As the super-PAC’s executive director, Preston Bates, put it in an email: “It looks like Christmas comes in August this year…”

Everything was going was just fine for Republicans in Michigan’s 11th District until their congressman decided to run for president.

Rep. Thaddeus McCotter, a bald, pasty, self-deprecating conservative with a monotone voice and a soft spot for economic protectionism, entered the presidential race in July and left two months later after receiving 35 votes at the Ames Straw Poll and one very bad case of midlife crisis. He coped by pouring his energies into writing a sitcom about his life that costarred an Asian sidekick whose catchphrase is “I’m Thai!” Thus distracted, McCotter failed to collect enough valid signatures to appear on the primary ballot, came under investigation for fraud, and in early June, citing a litany of “calumnies, indignities, and deceits,” abruptly resigned.

The ensuing vacuum has turned an otherwise anonymous House race into one of the oddest—and most vicious—GOP primaries of 2012. With the August 7th primary four days away, the only Republican on the ballot is Kerry Bentivolio, a reindeer rancher, Santa impersonator, and political novice who once starred in a low-budget movie suggesting that 9/11 was an inside job. A second candidate, Nancy Cassis, is spending $200,000 of her own money on a scorched-earth write-in campaign (“Nothing Fancy, Write-In Nancy“). And in just the last week, Liberty for All, a pro-Ron Paul super-PAC financed by a 21-year-old college kid from Texas, has injected hundreds of thousands into the race with an eye toward tipping the scales.

On one level, the race represents a choice between the Republican establishment and the burgeoning wing of Ron Paul-inspired libertarian-minded activists. Bentivolio, who has been endorsed by Sen. Rand Paul (R-Ky.) and his acolyte, Rep. Justin Amash (R-Mich.), is a proponent of “sound money,” a critic of the Federal Reserve, and a skeptic when it comes to domestic surveillance and overseas entanglements. A veteran of the Iraq war, Bentivolio now teaches high school English and runs Old Fashioned Santa and Company, which provides reindeer and a Saint Nick look-alike (Bentivolio) for holiday parades and tree lighting ceremonies. As the campaign proudly notes, “They also maintain a small flock of chickens, a 25-hive apiary of honeybees, and a 115-vine vineyard.”

Bentivolio was an also-ran in the primary until May, when McCotter failed to qualify for the ballot, leaving the GOP establishment scrambling for a viable replacement. They settled on Cassis, an influential state senator who had run unsuccessfully for governor and 2006 and had the resources to overcome a likely fundraising shortfall. Now Cassis has to take out Santa.

Cassis’ harshest criticism of Bentivolio has centered on her opponent’s appearance in a 2011 film called The President Goes to Heaven. Bentivolio plays the head doctor in the film, which centers around a president, modeled closely on George W. Bush, who is forced to account for his actions in Washington as he lies dying in a hospital. The movie is a crude, failed attempt at satire. In one scene, the actors discuss how the “1/11 attacks” were orchestrated by the vice president, “Dick,” in order to advance his own Middle Eastern oil interests. Elsewhere the movie serves mostly to let actors vent their anger.

Oscar bait, it is not. “You were more powerful than God,” a nurse tells the president, who is lying in a hospital bed with his own feces. “Do you remember those people jumping from the tower? All those people, standing on the ledges of the 84th floor, waving for help? Do you remember all the men in uniform you sent to Afghanistan to die?” She adds: “You were just the most powerful man on earth and now you’ve pooped your pants.”

The Cassis campaign posted a three-minute low-light reel from the film to YouTube and cut a 30-second ad attacking it as “sickening.” Cassis has vowed not to support her opponent if he wins on Tuesday, citing the movie. Bentivolio told the Detroit News that he had done the film for research purposes. “All I wanted to do was feel more comfortable in front of a camera and research film subsidies,” he said.

Coupled with Cassis’ massive cash advantage (Bentivolio barely had enough money for one ad buy), that would normally be the nail in the coffin for the Paulite. In the only poll of the race, released on Wednesday, Cassis led Bentivolio by 16 points, 52 to 36. But Cassis’ lead is shakier than it looks, because her name won’t appear anywhere on the ballot. In a close election, that could make all the difference.

The other X-factor is more conventional. Late last month, Liberty for All, the libertarian-minded super-PAC funded by 21-year-old Texas college student John Ramsey, began flooding the district with direct mail, robocalls, and television ads in support of Bentivolio. Liberty for All rose to prominence in May, when it poured $800,000 into a Kentucky race on behalf of another Rand Paul-backed candidate, Thomas Massie, who won easily. This time around, given the strength of the candidate and the short time frame, that money could be even more significant. By election day, Liberty for All will have spent $300,000 on advertising alone, according to the Detroit Free Press—10 times more than Bentivolio spent in the first six and a half months of the campaign. It’s 50 percent more than Cassis has pledged to her own campaign. Reached by phone on Thursday, the PAC’s executive director, Preston Bates, said he couldn’t talk because he was at the bank completing a wire transfer.

It’s a script so weird Thaddeus McCotter could have written it.