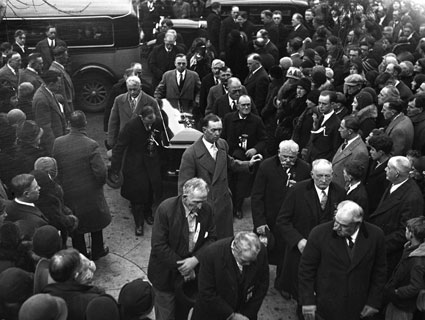 It’s safe to say that most people have never heard of this magazine’s namesake, whom Teddy Roosevelt once called “the most dangerous woman in America.” If you’ve worked at Mother Jones long enough, however, you’ve likely had a Mother Jones moment. Mine came two years ago inside a trailer home in the Appalachians of West Virginia, where I was interviewing an injured coal miner. “I remember that name from that video,” the miner’s son told me, referring to a class he’d taken to become a mining apprentice. “Mother Jones speaking before all the men.” He went on to regale me with the tale of her involvement, at the age of 84, in the Battle of Blair Mountain, a pitched fight between unionists and strike breakers in 1921 that remains the nation’s largest armed conflict since the Civil War.

A labor organizer about whom relatively little was known even at the height of her considerable fame, Mary Harris Jones is thought to have been born on roughly this day 175 years ago in Cork, Ireland. The town of Cork is honoring her this week with the first-ever Cork Mother Jones Festival, a three-day event featuring concerts, a mass at the cathedral where she was baptized, a commemorative plaque, and a day-long bus tour of her childhood stomping grounds. At the age of 10, Jones and her family of tenant farmers fled Ireland to escape the potato famine, relocating to Toronto, Canada and, in Jones’ case, later the United States.

As Jones’ biographer Elliott J. Gorn wrote in this magazine, her image as a badass grandma has roots in personal tragedy. An 1867 yellow fever epidemic in Memphis, Tennessee killed Jones’ husband and her four children. A widow at 30, she moved to Chicago and built a successful dressmaking business—only to lose everything in the Great Chicago Fire of 1871. She went on to toil in obscurity for two decades until suddenly inventing the persona of Mother Jones. “Or, to put it more precisely,” Gorn writes, “she began to play a role that she and her followers made up as they went along. By 1900, no one called her Mary, but always Mother; she wore antique black dresses in public, and she began exaggerating her age.

The new role freed Mary Jones. Most American women of that era led quiet, homebound lives devoted to their families. Women, especially elderly ones, were not supposed to have opinions; if they had them, they were not to voice them publicly—and certainly not in the fiery tones of a street orator.

Yet by casting herself as the mother of downtrodden people everywhere, Mary Jones went where she pleased, spoke out on the great issues of her day, and did so with sharp irreverence (she referred to John D. Rockefeller as “Oily John” and Governor William Glasscock of West Virginia as “Crystal Peter”). Paradoxically, by embracing the very role of family matriarch that restricted most women, Mother Jones shattered the limits that confined her.

For a quarter of a century, she roamed America, the Johnny Appleseed of activists. She literally had no permanent residence. “My address is like my shoes,” she told a congressional committee. “It travels with me wherever I go.”

By today’s standards, some of Jones’ rhetoric would be considered over-the-top, such as her threat to West Virginia’s governor that there could soon be “one hell of a lot of bloodletting.” And neither was she uniformly progressive—even by the benchmarks of her time. She considered women’s suffrage a distraction from labor organizing and thought most women should stay out of the workplace.

Yet Mother Jones’ greatest weakness was also her strength: She saw the world’s problems primarily through the lens of class. And in a weird way, maybe her myopia can bring some clarity to our own times. After quietly widening for decades, the economic chasm between the rich and everyone else has finally become an electoral issue, the grounds for a generation-defining political fight. Mother Jones would be busy right now—if she wasn’t in jail. “I asked a man in prison once how he he happened to be there and he said he had stolen a pair of shoes,” she once said. “I said if he had stolen a railroad, he would be a United States Senator.”