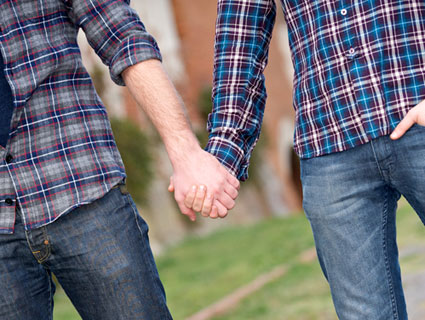 According to its platform, the Republican Party wants to reinstate Don’t Ask Don’t Tell, prevent same-sex marriages from being recognized by the federal government, and stop efforts to prevent gays and lesbians from being persecuted in Africa.

But that’s okay, they’re being super-polite about it.

The GOP platform for 2012 calls for a constitutional amendment banning same-sex marriage and affirms the party’s support for the Defense of Marriage Act, which forbids federal recognition of same-sex marriages performed in the states. (The Obama administration has ceased to defend the law, arguing that part of it is unconstitutional.) Unironically railing against “government control over the lives of its citizens in all aspects,” this section of the platform also states that “the union of one man and one woman must be upheld as the national standard” through “laws governing marriage.” However, at the end of the paragraph explaining the party’s position, the platform states, “We embrace the principle that all Americans should be treated with respect and dignity.” So instead of same-sex marriage rights, same-sex couples will get “respect and dignity,” which is apparently not something they’re supposed to expect normally.

Likewise, in the section on “Supporting Our Troops, Standing By Our Heroes,” the platform authors use the phrase “respect and dignity” before decrying “social experimentation,” in the military. For anti-gay activists, “social experimentation” is a euphemism for allowing gay and lesbian servicemembers to serve openly without fear of being discharged because of their sexual orientation. “The members of our military should be treated with the utmost respect and dignity,” the GOP platform reads, “We reject the use of the military as a platform for social experimentation and will not accept attempts to undermine military priorities and mission readiness.” Part of the GOP’s extension of “utmost respect and dignity” for servicemembers includes preventing the government from acknowledging gay and lesbian servicemembers. “We affirm the cultural values that encourage selfless service and superiority in battle, and we oppose anything which might divide or weaken team cohesion, including intra-military special interest demonstrations,” the platform states, an apparent reference to the Department of Defense’s decision to recognize LGBT pride month this year and allow some servicemembers to participate in LGBT pride events in uniform. Because of current law, military families headed by same-sex partners are denied the same benefits as heterosexual couples. Retaining this disparity is another part of the GOP’s “respect and dignity” agenda for gay and lesbian servicemembers, as the party’s support for the Defense of Marriage Act is reiterated in this section.

As I reported yesterday, the GOP platform also decries efforts by the Obama administration to oppose laws in African countries that criminalize homosexuality. Some of the legislation being proposed would include prison time and even execution as punishment for homosexuality, but the GOP platform says the Obama administration of “imposing” the “homosexual rights agenda” on “the peoples of Africa” by trying to change them. The GOP’s “respect and dignity” agenda for gay people apparently doesn’t include preventing them from being executed or imprisoned outside of the US.

That’s not to say the GOP platform completely ignores civil rights in the context of the LGBT rights movement. On the contrary, it expresses deep concern for the rights of anti-gay rights groups. “We condemn the hate campaigns, threats of violence, and vandalism by proponents of same-sex marriage against advocates of traditional marriage and call for a federal investigation into attempts to deny religious believers their civil rights,” the platform reads.

In the Republican platform, opponents of same-sex marriage have civil rights that must be defended. Gays and lesbians on the other hand, get “respect and dignity,” and little else.