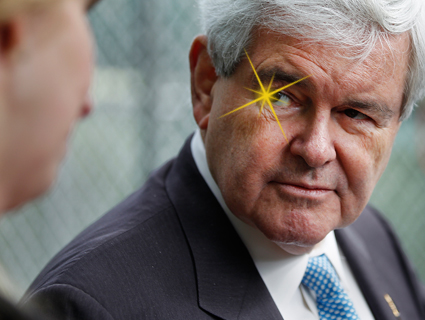 During the primary, Paul, a long proponent of what he calls “sound money,” and later Newt Gingrich, the former speaker of the House, embraced the idea of a gold commission. During the South Carolina primary, Gingrich said that he’d appoint Lewis Lehrman, a banker, and Jim Grant, a prominent investment adviser, to co-chair the gold commission. Both Lehrman and Grant (Paul’s pick to replace Ben Bernanke as chairman of the Federal Reserve) are prominent advocates of the gold standard.

Now that the commission he and Paul supported is part of the draft party platform, I asked Gingrich whether he still supported Lehrman and Grant’s appointments—and whether he’d push Mitt Romney to appoint them if elected president. “Yes,” he said. “I’d recommend them.” Romney himself has expressed skepticism about the gold standard, which he told CNBC’s Larry Kudlow in January is not a “magic bullet substitute for economic restraint.” He’d be free to ignore the GOP platform and Gingrich’s recommendations if elected president. But the inclusion of the commission proposal in the platform, and Gingrich’s willingness to press the issue, suggest that Romney will remain under some pressure from his right to at least acknowledge the concerns of gold proponents.

The idea of a gold commission isn’t new—Ronald Reagan established one in 1981, but the members voted 15 to 2 against advising a return to gold. (Lehrman was one of the dissenters.) America’s monetary policy was based on the gold standard for much of its history, until President Richard Nixon abandoned it for good in 1971. Since then, a small but significant movement, often led by Paul has advocated a return to gold.

Today, Lehrman is the chairman of the Lehrman Institute, which pushes for “prosperity through gold.” Its website is thegoldstandardnow.org. Grant is a senior adviser to the group.

Most modern economists are skeptical of the idea, and liberal ones absolutely loathe it. A recent University of Chicago poll of top economists found that zero agreed that “defining a ‘dollar’ as a specific number of ounces of gold” would lead to better “price-stability and employment outcomes” for “the average American.” Paul Krugman, the liberal icon (and target of many Paul fans’ ire) wrote Sunday that “under the gold standard America had no major financial panics other than in 1873, 1884, 1890, 1893, 1907, 1930, 1931, 1932, and 1933.” Famed economist Milton Friedman, who could not be mistaken for a Krugmanite, famously said “those people who say they believe in a gold standard are fundamentally being very anti-libertarian because what they mean by a gold standard is a governmentally fixed price for gold.”