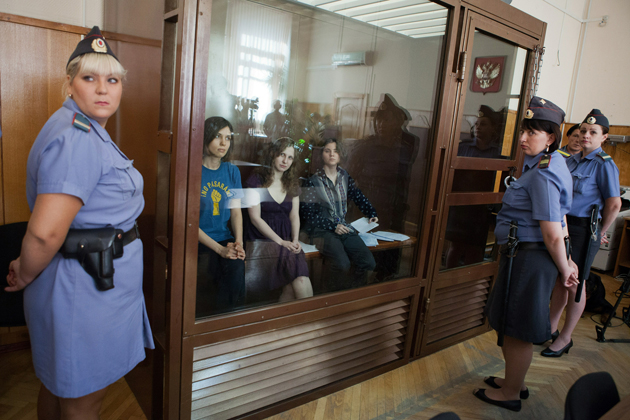 No one reads Anna Karenina these days to find out that poor, messed-up Anna throws herself under the train; we all know she’s done for the moment she sets her eyes on Vronsky.

And so it was with the hundreds of people who gathered this afternoon on a leafy street in central Moscow to await the judge’s ruling in the Pussy Riot trial. Only an idiot could have doubted that the three young women would be found guilty of anti-religious hooliganism (whatever the hell that is) for their anti-Putin punk-rant in Moscow’s central cathedral; that they received a sentence of two years instead of the three demanded by the prosecutor was not viewed by anyone, except perhaps the authorities, as a sign of leniency.

In fact, Moscow has been gripped by pussy fever all week, as the city braced for the verdict and news organizations published breathless updates and commentaries about day-to-day developments. Yesterday came word that the judge in the case, Marina Syrova, had asked for bodyguards because of the “incessant threats” she had received because of the trial. The Moscow Times, the city’s English-language daily, yesterday published a scathing commentary blasting Madonna for her expression of support for the Pussy Riot grrls in her recent Russian concerts and declaring that “the truth has no significance in the West.”

(The Pussy Riot trial, by the way, was not the only legal morass here involving Madonna. Several upstanding St. Petersburg residents have apparently filed a lawsuit against the singer for expressing tolerance towards gays and lesbians during a performance where there were—gasp!—teenagers in the audience. The city passed a law earlier this year outlawing this sort of “homosexual propaganda,” especially to the young and impressionable.)

This morning, long before the scheduled 3 p.m. reading of the verdict and sentence, police had blocked off access to the courtroom on Rostovskii Lane, along the banks of the Moscow River, erecting barricades about two blocks away amid predictions of possible unrest following the verdict. When I arrived at 2 pm, the area was already jostling with people of all stripes—young, old, hip, not-so-hip, punks, pensioners, priests, students, business types, lawyers, queers.

Some wore balaclavas in solidarity with the three prisoners, who donned similar masks during their church performance. Many sported white ribbons, a symbol of Putin’s political opponents. And there were scores of T-shirts with the slogan “Free Pussy Riot.” (An important side question: Do non-English-speakers here understand what “pussy” means? My informal survey of my Russian friends yielded mixed views on this vital question. Some said yes, of course. Others weren’t so sure. But, remarked a friend of mine, if they didn’t know what “pussy” meant before, they do now.)

There were also dozens, if not hundreds, of reporters on the scene, a mark of the intense international interest aroused by the bizarre proceedings; it was impossible to avoid bumping into cameras, television vans, and reporters conducting interviews with microphones and tape recorders. Yuri Samodurov, a soft-spoken human rights activist and a former director of the Sakharov Museum in Moscow, said it seemed like there were more reporters there than protestors.

Samodurov, who is 61, was prosecuted several years ago for staging an art exhibit that, like the Pussy Riot performance, was found to have offended religious sensitivities. He wore a button touting Article 31 of the Russian constitution, which guarantees citizens the right to hold peaceful rallies and demonstrations. “They’re going to be deprived of their freedom,” he predicted glumly—and, as it turned out, accurately.

“If they are freed, it will be on us, that we let them go. They don’t even teach about God in the schools anymore.”

I hung around for a while with a small group of church supporters; they held up bibles, crosses and icons of saints and virgins, as if to ward off the perfidy of the non-believers surrounding them. I asked Maria Putilina, a petite, middle-aged woman dressed in bright purples and blues and a magenta head covering, whether she felt she had suffered a “moral injury” from the prisoners’ church escapade, as the prosecution repeatedly claimed. Absolutely, she told me.

“I was in shock over it,” she insisted. “I couldn’t even understand how that could happen. And how can our intelligentsia support this?” God was watching the proceedings and would judge the nation harshly should Pussy Riot walk, she told me. “If they are freed, it will be on us, that we let them go. They don’t even teach about God in the schools anymore.”

One of her compatriots, a young man sporting a scraggly, Rasputin-like beard and long, stringy hair pulled back into a bun, told me that they were ready to forgive the sinners, if only they would repent. “But they haven’t apologized, they haven’t repented even once,” he said.

Another of their group, a young, doe-eyed man in ill-fitting clothes, appeared to fancy himself the Justin Bieber of Russian Orthodox rock. He whipped out his guitar and enthusiastically—if badly—strummed a series of “praise-be-to-God” hymns.

“Christ has risen! Christ has risen!” chanted the cluster of believers with great gusto and, it must be acknowledged, a certain bravado, given the overwhelming numbers ardently expressing their disagreement.

“Christ himself was a provocateur!” yelled out an elderly man beside me in response.

“I’m not a believer—why should they impose their beliefs on me?” yelled another.

As the police arrested various participants—often, it seemed, without any apparent reason—the crowd chanted “Shame! Shame!” and “Russia without Putin!” Some arrestees strolled calmly into the waiting police vans; others went limp and had to be dragged, shoved and manhandled aboard.

The verdict—guilty—came early, not long after the start of the court proceedings. Waiting for the sentence took much longer. By the time the judge reached the end of her three-hour declaration—and announced the two-year sentences—many members of the crowd had already wandered off, bored and dispirited.