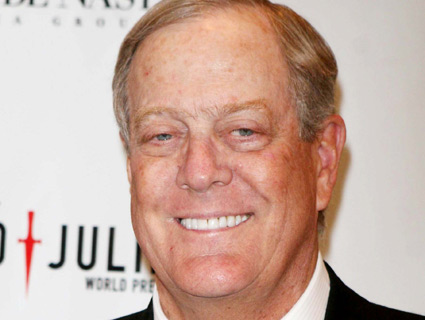 David Koch has helped to raise millions of dollars for Mitt Romney’s presidential campaign, placing him among Romney’s most successful super-fundraisers, known as “bundlers.” Now the billionaire industrialist and Koch Industries executive is set to represent Romney as a delegate at the Republican National Convention in late August.

Koch, who with his older brother Charles is marshaling hundreds of millions of dollars for GOP causes in 2012, is listed as one of 34 at-large delegates by the New York Republican Party, according to National Journal. It’s unclear if Koch will actually go to Tampa to vote to formally give Romney the GOP nomination, but if he does, you can expect quite a stir given Koch’s prominence in conservative circles and demonization by liberals.

Koch helped found Americans for Prosperity, the powerful conservative nonprofit organization headquartered in northern Virginia. AFP is a major player in the 2012 election cycle. It has launched sophisticated voter registration campaigns in battleground states and is expected to unload $25 million on ads urging people to vote President Obama out of the White House. AFP had never before run ads expressly saying “vote for” or “vote against” a particular candidate, AFP president Tim Phillips told reporters this week. But Phillips cited the “disastrous economic policies of this administration” as the driving force behind the anti-Obama ad blitz. (The real reason for AFP’s new ad strategy may have more do with this.) The first wave of anti-Obama ads, Phillips added, will cost $6.7 million and run in Colorado, Florida, Iowa, Minnesota, Nevada, New Mexico, North Carolina, Ohio, Pennsylvania, Virginia, and Wisconsin.

David Koch’s personal support for Romney includes a $50,000-a-head fundraiser in July at his oceanfront home in Southampton and another 2010 Hamtpons fundraiser.