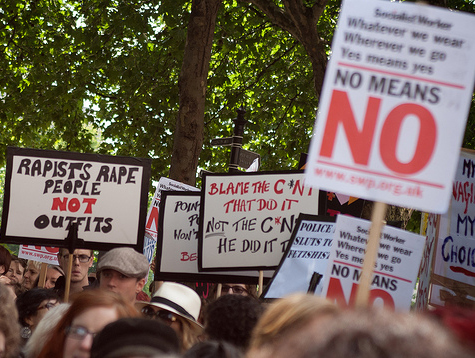 Akin landed in the middle of a controversy this week after he remarked that women who are the victims of “legitimate rape” can’t get pregnant because “the female body has ways to shut that whole thing down.” Many of his fellow Republicans joined the ensuing chorus of condemnation, and GOP leaders begged Akin to quit the Missouri Senate race. American Vision, in an article posted on its website and authored by the group’s research director, Joel McDurmon, says Republican calls for Akin to step aside are basically like forcing someone to have sex against their will, repeatedly, with numerous perpetrators—politically-speaking, of course:

We expect leftists, liberals, and other miscreants to pounce opportunistically, to lie, cheat, and twist (all the while drooling) over a phrase like “legitimate rape” when uttered by a strong conservative Christian politician. But should we expect the same from alleged conservatives?

Yet this is exactly what we’ve seen from several prominent conservatives in the wake of a media gaffe from U.S. Senate candidate Todd Akin (R-MO) in regard to alleged “legitimate rape” and abortion.

What could have been quickly and easily handled with a consolidated response correctly interpreting Akin’s unfortunate phrase was instead a rare cause of bipartisan hazing.

The piece goes on to argue that Akin was actually accurate in his statement that it’s rare for women to become pregnant as a result of “legitimate rape,” a view shared by a lot of anti-abortion activists. McDurmon also argues that even if in few cases when a rape victim does become pregnant, an abortion is still unjustified. Treading into full-on misogyny, he claims that if abortion were outlawed except in cases of rape, many women would cry rape in order to “kill out of convenience.”

Liberals may wish us to believe that no woman would ever stoop so low as to lie about being raped. But this simply does not comport with what we Christians know about fallen human nature. We, conservatives, all agree that millions of women annually conspire to commit murder on their unborn babies. So do you expect me to feel it unacceptable to believe they would lie about why? This is political correctness run amok. Why, after all, would someone willing to kill out of convenience not also lie for various reasons out of convenience?

Commentaries like McDurmon’s are really doing the GOP no favors. It’s pretty hard for the party to disassociate itself with Akin’s views when it’s becoming clearer by the day that a number of social conservatives share them.