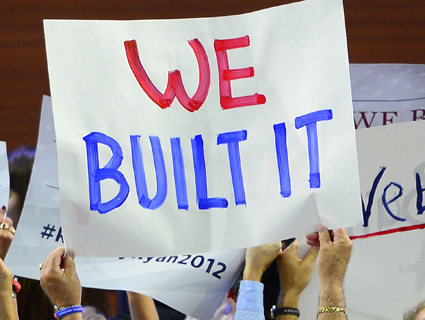 At the Republican national convention on Tuesday, nearly every speech invoked—in an unfair, out-of-context manner—President Obama’s statement that successful small business owners benefit from government investment in roads, bridges, and education. Republicans have repeatedly used Obama’s line “you didn’t build that,” excluding the crucial context, to imply that Obama believes that entrepreneurs didn’t build their own businesses.

One small business owner tapped by the Republican National Committee to speak at the GOP’s “I Built That”-themed convention Tuesday was Phil Archuleta, owner of P&M Signs in New Mexico. “President Obama talks like he supports small businesses, but his actions are destroying us,” Archuleta told the thousands in attendance Tuesday night. “His administration is putting us out of business. It is our turn to put them out of office!”

But Archuleta’s business, like those of several other business owners at the GOP convention, benefited greatly from government help. Through the Department of Commerce’s Minority Business Development Agency, Archuleta secured an $850,000 Small Business Administration loan guarantee to build an 11,700-square-foot building for his company.

The Minority Business Development Agency’s website also says that Archuleta worked with the US Forest Service, to which he supplies signs, and a Department of Energy laboratory to develop environmentally friendly sign materials. So not only did Archuleta build new infrastructure for his business with a government loan, he collaborated with government agencies to improve the quality of his product.

Archuleta’s small business, in other words, directly contradicts the GOP’s “I built that” nonsense. The Republican National Committee has trotted out business owners to highlight Obama’s and the government’s supposedly harmful effect on businesses. In Phil Archuleta’s case, government has had the opposite effect.