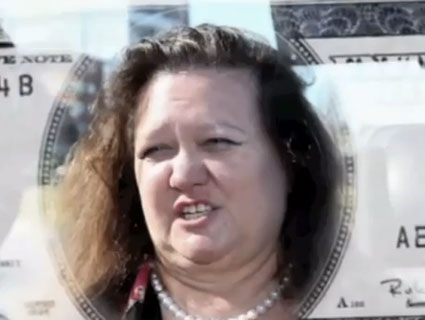 Note to American exceptionalists: Other countries have insensitive rich people, too. Australian Gina Rinehart, reportedly the world’s wealthiest woman, has a message for you poor people. “In her latest column in Australian Resources and Investment magazine,” Yahoo reports, “Rinehart rails against class warfare and says the non-rich should stop attacking the rich and go to work”:

“There is no monopoly on becoming a millionaire,” she writes. “If you’re jealous of those with more money, don’t just sit there and complain. Do something to make more money yourself—spend less time drinking, or smoking and socializing and more time working.”

Pray, what does Rinehart do for a living? She is a “mining heiress,” according to the piece.

But she would like you to know that her grandfathers “started at the bottom and worked their way to the top.”

Indeed, Rinehart’s wealth is derived from a family trust and an executive position in a mining company she inherited from her father after his death in 1992. Since then, she’s kept very busy—pouring her wealth into conservative causes and political front groups she helped set up, not unlike the scions of the oil-enriched Koch family here in the states. She recently tried to import cheap visa workers after unionized Australian miners asked for a competitive wage, and in 2011 she sponsored an Australian tour by Lord Christopher Monckton, a noted climate-change skeptic.

Rinehart’s fortune reportedly increases by $52 million Australian dollars a day. In US dollars, that works out to be about $618 every second. And she’d really like you to get off your lazy ass and pull your weight, please.

In recent weeks, Mother Jones has explored the phenomenon of mansplaining, when males patronizingly (and often incorrectly) explain things to ladies as if the latter were ignorant children. I’d like to coin a new term for bloviating lectures of the sort Rinehart gave, wherein a rich person confidently tells the non-rich what’s wrong with them. While discussing this with the MoJo staff, my colleague Adam Serwer thought of libertarian hero Ayn Rand, who popularized the notion of the super rich being naturally moral. He hit on a good portmanteau: randsplaining. I rather like that. Internets, go do your thing.